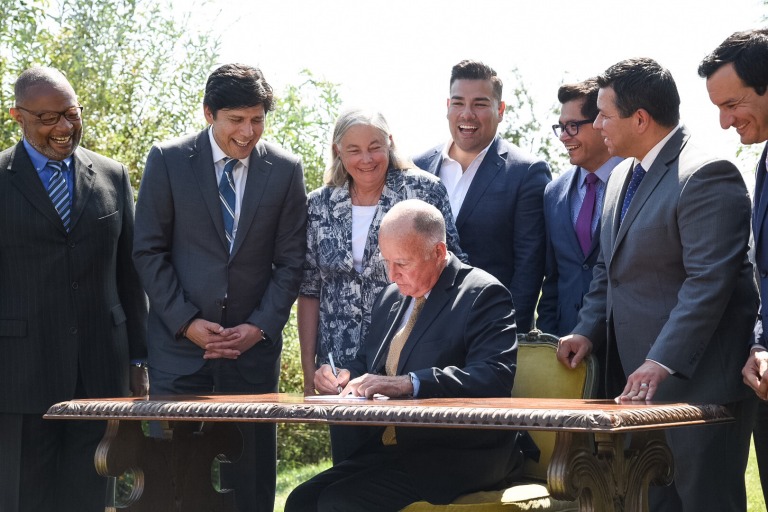 Ten years after the state adopted the California Global Warming Solutions Act of 2006, Gov. Jerry Brown, D-Calif., has now strengthened the legislation’s commitment by signing two new bills that require California to cut emissions at least 40% below 1990 levels by 2030, as well as invest in the communities hit hardest by climate change.

According to a press release from the governor, Brown signed the bills yesterday from the Vista Hermosa Natural Park, a 10-acre urban wilderness project built atop an old oil field and the first public park built in more than 100 years in the densely populated western edge of downtown Los Angeles.

Brown says the 2006 legislation, A.B.32, set forth the toughest greenhouse-gas (GHG) emission-reduction goals in the nation: decreasing them to 1990 levels by 2020, which California is on track to meet or exceed.

Last year, however, the governor issued an executive order to reduce GHG emissions in California 40% below 1990 levels by 2030 – a goal now codified by S.B.32. In addition, according to Brown, S.B.32 will help make it possible to reach the ultimate goal of reducing emissions 80% under 1990 levels by 2050.

By placing this goal into statute, Pavley said, the bill “sends a clear, unequivocal signal to entrepreneurs and innovators that California will remain the place to invest in the 21st century economy.”

On the other hand, A.B.197 establishes a legislative committee on climate change policies. The group’s goal will be to ensure that the state’s actions to reduce GHG emissions are conducted with transparency and accountability, according to the governor.

A news release from Garcia says the legislation also requires the Air Resources Board (ARB) to prioritize direct emission reductions and consider potential impacts when adopting regulations to reduce GHG emissions. Lastly, A.B.197 will add two additional non-voting members from the legislature to the ARB.

“S.B.32 extends California’s landmark greenhouse-gas reduction goals. A.B.197 changes the game on how we make sure those goals are reached,” explained Assembly Speaker Anthony Rendon. “The successful effort behind these two bills is the latest sign of a growing consensus that protecting the environment and improving public health are inextricably linked and that maintaining that link is key to advancing future environmental actions.”

“Climate change is real, and knowing that, California is taking action,” said Brown. “S.B.32 and A.B.197 are far-reaching moves that continue California on its path of vast innovation and environmental resilience.”