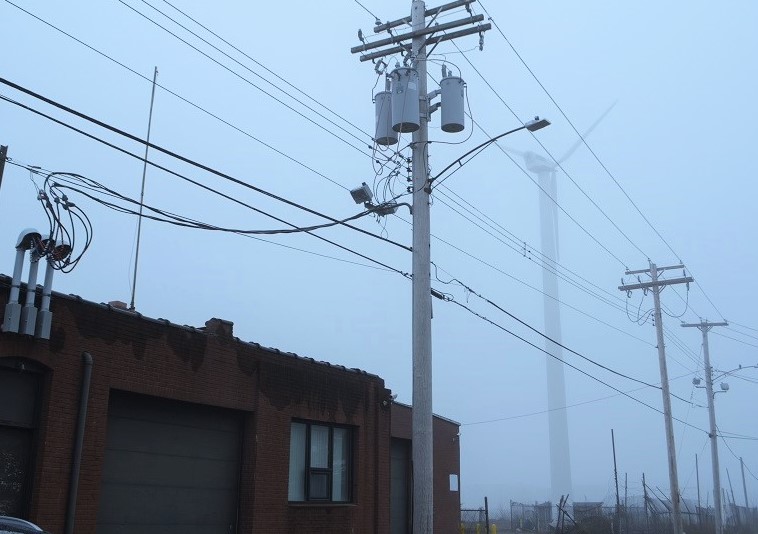 When a family-owned printing and mailing business in New Haven, Conn., was looking to bring down its electricity and gas bills, it turned to renewable energy: specifically, a 100 kW wind turbine situated on-site. Six years into operations, the tower not only offsets about one-third of the company’s power, but also shows customers and the surrounding community the power of clean energy.

Phoenix Press Inc., which was founded in 1982, recently gave NAW a grand tour of the facility, where President Brian Driscoll explained the inner workings of the wind-powered business, which touts itself as the U.S.’ “first commercial-grade, wind-turbine-powered printing facility.”

The turbine, standing 121 feet (about 37 meters) tall from the ground to the hub, overlooks the Quinnipiac River on the northern side of Long Island Sound. The tower was built and installed, respectively, by fellow New England companies Northern Power Systems and Alteris Renewables.

Following consultation with the state’s Department of Energy & Environmental Protection, Phoenix Press went with wind rather than solar power because the building, measuring 56,000 square feet, is roughly 100 years old; rooftop panels simply would have been too heavy, explained Driscoll.

Thanks to a Connecticut Clean Energy Fund (now Connecticut Green Bank) grant of more than $250,000, which paid for about half of the project, the turbine began commercial operations in March 2010, following about a year of construction. The structure produces power for much of the printing machinery, as well as heat and air conditioning, and the energy is fed back into the grid when not used by the printer.

Considering the often extreme weather conditions in Connecticut, the tower, which is closely monitored by Northern Power and can also be shut down by Phoenix Press via phone, computer or breaker, is sometimes turned off for safety reasons due to ice shearing. After all, the structure, towering prominently over the New Haven Harbor, is adjacent to the company parking lot and bustling harbor.

However, Driscoll maintains that the community has been more than welcoming to the project; indeed, Phoenix Press has given tours to thousands of kids and college students who want to learn more about wind energy and how it produces power for the printing company.

“There are a lot of people who like our message,” he said.

In fact, the printing press offers its “Wind to Print” logo on the literature it produces for customers. That way, explained Driscoll, companies can let their readers know they’ve chosen a printing company “that’s doing good for the world.”

Phoenix Press’ focus on sustainability stems beyond just wind energy: Driscoll, a board member of the Green Energy Council, said 99% of the business cards the company produces for customers are made with biolocity ink, which is vegetable- and soy-based. In addition, much of its printing paper comes from what he called “responsible forests,” and the press is certified by the Forest Stewardship Council.

Moreover, the turbine is the centerpiece of an increasingly expanding ecosystem: Phoenix Press loans some of the outdoor property to urban farmers, and the area – which was originally overgrown and was cleared specifically to house the tower – is also now home to an array of growing produce, as well as bee hives.

Driscoll, who also noted his own recent purchases of reduced-emission cars, thanks Phoenix Press’ adoption of wind power for the company’s growing focus on environmentally friendly practices, as well as the omnipresent “Wind to Print” marketing scheme.

“It’s changed the philosophy of the company … and how we do things.”