Gov. Jim Justice, R-W.Va., is welcoming plans for the Black Rock Wind Farm, which would straddle the line of Mineral and Grant counties.

“This investment is truly great news for Mineral and Grant counties and all of West Virginia,” says Justice. “My administration is committed to finding every possible way to enhance energy production in West Virginia, and the Black Rock Wind Farm is the perfect example of a project that will be a win-win in many ways. Not only will the project harness West Virginia’s inexhaustible wind for clean energy production, it will bring good-paying jobs during construction, and then, once it’s built, this wind farm will continue to stimulate our economy for years to come.”

During the construction phase, Black Rock is expected to create 290 jobs, representing approximately $14 million in labor income payroll and $44 million in regional economic output. Additional local jobs will be created to staff the plant, which will be supplemented with contractor services provided by area businesses. During construction, the wind farm is expected to generate at least $4.8 million in state and local taxes, with a further $12 million over its first 25 years in operation.

Clearway, which is developing the project, owns and operates the Lookout and Forward Wind Farms in Somerset County, Pa., and the Pinnacle Wind Farm near Keyser, W.Va. The Pinnacle project has a Community Benefit Fund – overseen by residents – that has contributed $191,000 to date toward brick-and-mortar projects and nonprofit organizations since 2013. Black Rock is expected to have a similar fund to benefit Mineral and Grant counties.

Craig Cornelius, CEO of Clearway, says the company has submitted a siting certificate application with the West Virginia Public Service Commission. Upon approval of a siting certificate, Clearway expects to start construction on Black Rock next year, with commercial operations commencing in 2021.

“Given the success of Clearway’s existing Pinnacle Wind Farm next door and the relationships we’ve been able to build with surrounding communities, we’re excited to expand our footprint and bring even more local jobs and economic opportunity to the Mountain State,” Cornelius says.

According to the American Wind Energy Association, West Virginia currently has an installed wind capacity of 686 MW. Therefore, the 170 MW Black Rock project would represent a nearly 25% increase. 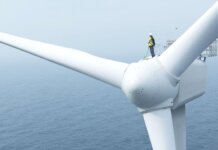