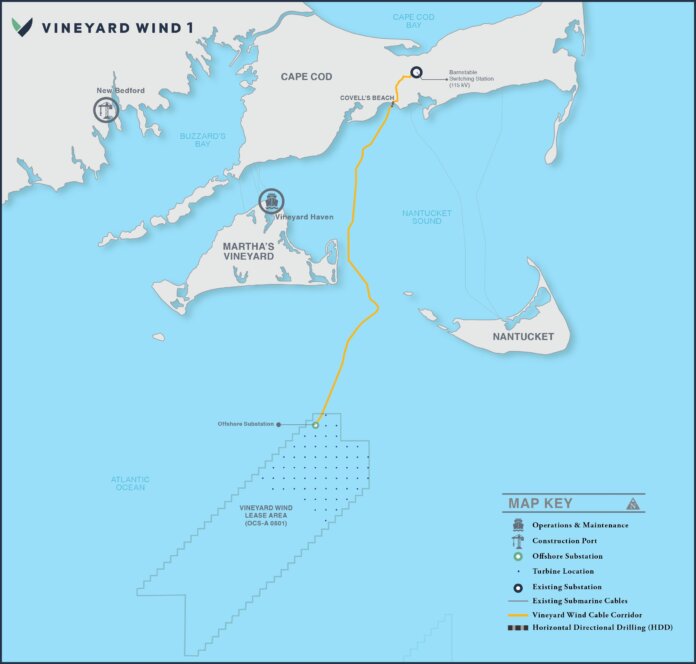 Vineyard Wind’s recent Commonwealth Wind proposal includes a partnership with Energy New England (ENE) that will allow municipal light plants (MLPs) to purchase offshore wind power – an opportunity that will green the portfolios of MLPs across the state.

Under the agreement, MLPs would be able to purchase up to 146,000 MWh per year in addition to renewable energy credits (RECs), reducing carbon pollution by 300,000-400,000 tons over the lifetime of the contract. This agreement will enable the MLPs to make meaningful progress toward meeting renewable energy targets, as required under Massachusetts’ new climate law.

“MLPs generate 15 percent of the commonwealth’s current energy baseload, and until now they have not had the option of procuring power from the state’s ambitious offshore wind projects,” says Vineyard Wind CEO Lars Pedersen. “With the announcement of this partnership, that’s no longer the case. We know that municipalities like ENE’s owners have goals to green their energy usage, and with this partnership in place we can help them take meaningful steps toward this goal.”

“This agreement demonstrates that offshore wind can and will deliver the benefits of clean electricity to all of Massachusetts,” mentions Bill White, head of offshore wind for Avangrid Renewables. “This partnership is an important step forward in our work to green the commonwealth’s energy mix and to make clean energy accessible to all.”

Commonwealth Wind can deliver up to 1,200 MW of clean and affordable energy to Massachusetts, power 750,000 homes in Massachusetts, create over 11,000 jobs (FTE), catalyze hundreds of millions of investments in offshore wind infrastructure, and deliver substantial commitments to environmental justice communities.

“This is a significant partnership between Vineyard Wind and ENE with its MLP clients, one that signifies the commitment that all the relevant parties have to the commonwealth’s clean energy goals,” states John G. Tzimorangas, president and CEO of Energy New England. “The willingness of the MLPs to participate in this proposal and to continue their commitment to reducing emissions, as they have been doing, adds to their non-emitting portfolios.”