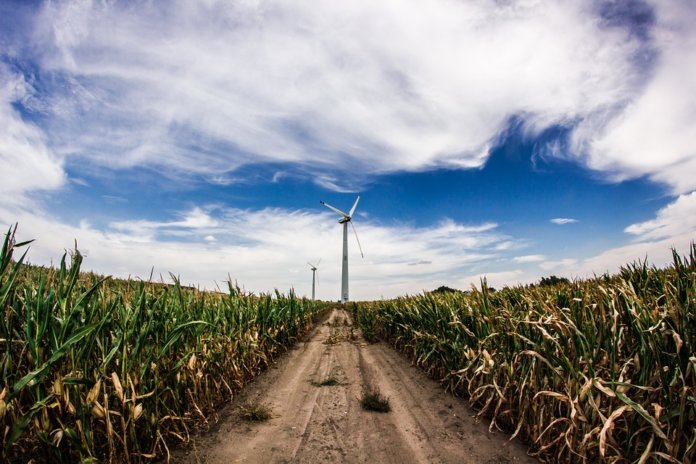 The modern U.S. wind industry was born in California in the 1980s. Starting from humble beginnings, the industry started to grow quickly in 2008, explains AWEA. At the beginning of that year, the country only had 25 GW of wind power, but in the 11 years since, the industry has delivered an additional 75 GW of power to American consumers. For context, 100 GW of wind power generates more electricity than California and New Jersey together consume each year.

Tom Kiernan, CEO of AWEA, calls the 100 GW milestone more than “just a number” but, rather, “the product of 40 years of ingenuity and work from the more than 114,000 Americans directly employed by the wind industry.”

“Their hard work has paid off, from pioneering California to the booming wind belt in America’s heartland and our first offshore project in New England waters,” Kiernan says. “Wind now supplies clean and efficient power to the equivalent of 32 million American homes, sustains 500 U.S. factories, and delivers more than 1 billion dollars a year in new revenue to rural communities and states.”

As wind energy grows across the country, so do its economic and environmental benefits, the report notes. Wind strengthens the U.S. economy by supporting 114,000 jobs, 500 factories and $1 billion each year in lease payments to landowners (combined with state and local taxes). Further, innovation has cut the cost of wind energy by 69% in the last decade, contributing to lower overall electricity costs.

In addition, according to the report, increasing the use of wind energy cuts harmful air pollution and preserves fresh water supplies for drinking and agriculture. In fact, wind power is one of the most affordable and rapidly deployable options to address climate change. In total, 100 GW of wind power avoids greenhouse-gas emissions equal to 240 million metric tons of carbon dioxide each year, or roughly 13% of yearly U.S. power sector emissions.

More specifically, the U.S. has reached 100,125 MW of wind energy, with more than 57,700 wind turbines spinning across 41 states and two U.S. territories. This milestone was reached as developers installed eight new wind projects totaling 1,927 MW in the third quarter, representing the highest third quarter for installations on record. Installations for the year total 3,667 MW, representing a 123% increase over the first three quarters of 2018.

Strong wind power deployment is expected to continue: The near-term wind project pipeline grew to yet another record in the third quarter of 2019, reaching 46.5 GW – equal to almost half of the wind energy operating today. There is now 22,651 MW under construction and an additional 23,844 MW in advanced development, including 5,792 MW of offshore wind. The total pipeline increased 11% over the second quarter and 22% year over year as project developers announced 10,090 MW of new projects in the third quarter.

AWEA says this project pipeline continues to grow, thanks to demand for wind power from utilities and corporate purchasers, as well as state-driven demand for offshore wind. Project developers and power purchasers announced 1,379 MW of power purchase agreements (PPA) in the third quarter of 2019, contributing to a total of 6,179 MW for the year. Corporate customers, including Sprint, Gap and Honda, signed up for 888 MW of wind. In addition, utilities announced plans to build and own 4,198 MW of new wind projects, including 2,640 MW of offshore wind. States also continued their push for offshore wind, with New York selecting 1,696 MW from two projects to help meet its goal of 9,000 MW of offshore wind by 2035, while Virginia’s Gov. Ralph Northam issued an executive order for the state to develop 2,500 MW of offshore wind by 2026.

“Wind power is growing rapidly, especially with a major new market opportunity offshore,” Kiernan adds. “Americans will reap the benefits of the next 100 GW of clean, reliable wind energy in much less time and at lower cost. As we speak, wind farms with a record combined capacity of over 46 GW are already in the works and expected to come online in the next few years.”

I think this is enough power to launch Doc and Marty back to the future, wow the renewable energy industry has come such a long way.