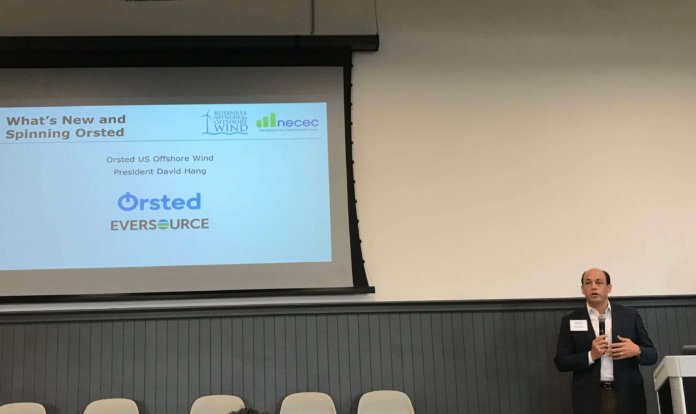 Preceded by remarks from Rhode Island’s Gov. Gina Raimondo, who touted the state’s leadership in offshore wind and declared, “We are not drilling for oil off the coast of Rhode Island – we are harvesting clean offshore wind energy,” Hang said, “This is unquestionably the state that started the U.S. offshore wind industry.”

The event, hosted by the Northeast Clean Energy Council and the Business Network for Offshore Wind, was fittingly held in the state with the country’s first and only operational offshore wind facility, the 30 MW Block Island Wind Farm.

Hang, who was a part of the project’s development from the onset, explained that Block Island, R.I., was “a great place to start” for the U.S.’ first offshore wind project.

Deepwater Wind, which was previously owned principally by an entity of the D.E. Shaw group and is now part of Ørsted US Offshore Wind, developed the wind farm, which transitioned Block Island from diesel- to wind-powered electricity. Hang, formerly senior vice president at D.E. Shaw & Co. and board member at Deepwater Wind, explained that offshore wind “addressed an immediate need” for the island: Diesel, brought in from ferries, was pricey and loud. In addition to the switch to clean energy, as a bonus, residents benefited from the introduction of high-speed internet, thanks to newly installed fiber-optic cables, Hang pointed out.

Now, in a joint venture with Eversource, Ørsted US Offshore Wind is developing the 800 MW Revolution Wind offshore project, to be located in federal waters roughly halfway between Montauk, N.Y., and Martha’s Vineyard, Mass. In May, Rhode Island regulators unanimously approved a long-term power contract with National Grid for 400 MW of energy from the project.

Hang, who touted Rhode Island as a “great partner” for offshore wind over the years, said the Block Island Wind Farm established the U.S. offshore wind industry, but the Revolution Wind project is solidifying it.

However, as he explained, it hasn’t been the easiest process to get here. Mentioning the embattled Cape Wind project, Hang pointed out, frankly, that the industry “has almost died a few times.”

In order to make offshore wind happen in the U.S., he said, it was necessary to figure out how to “make it palatable for ratepayers” – i.e., make it competitive with other prices of electricity generation.

“We didn’t know how long it would take for the industry to take off,” he said, adding that we also didn’t know the potential for how big it could be.

Going forward, Hang delivered some advice on how to avoid any future setbacks – as he put it, how to not “screw up.”

First and foremost, you have to “deliver on promises,” he said. This includes jobs, permits and other expectations that you have publicized – i.e., don’t make promises you can’t keep.

Next, stressing the importance of collaboration and transparency, Hang warned that you cannot rush through “essential stakeholder processes.”

“Listen to people; reach out to them,” he explained.

Hang noted that he does have sympathy for opponents of offshore wind; after all, as an entirely new industry here, the pace of development these days can be “pretty daunting.” While the Block Island Wind Farm stands at 30 MW, Revolution Wind will be more than a whopping 26 times the size in terms of capacity. Not long after Hang delivered his speech, a few states over, New York’s Gov. Andrew M. Cuomo announced a 1.7 GW offshore wind agreement, selecting an 880 MW project from Ørsted/Eversource and an 816 MW project from Equinor.

Hang, suggesting that we “are at an inflection point in the industry,” explained why it is so important to keep growing offshore wind in the first place: It’s gone from “nice to have” to “need to have.” No longer just a novelty, offshore wind is necessary from a “generation perspective,” Hang said.

This includes considerations and concerns such as electricity costs, emissions-reductions requirements, renewable portfolio standards and the need for more generating capacity. Indeed, as Raimondo put it during her speech, “We cannot race fast enough to get to our renewable energy future.”

When it comes to offshore wind, Hang said, “utilities and states need this.”

“The stakes have been raised,” he added. 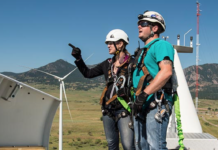 Interesting article but it completely omits David Hang’s final point at this meeting. It would be very nice to see an addendum to this article sharing the full sentiment that he expressed as to how to guarantee that the process will move forward. If you recall, there were two points he made at the conclusion of his speech. I look forward to that represented to your viewers.

Concerned stakeholder, what were the concluding sentiments? I know this is a year later but I’m curious. Thanks