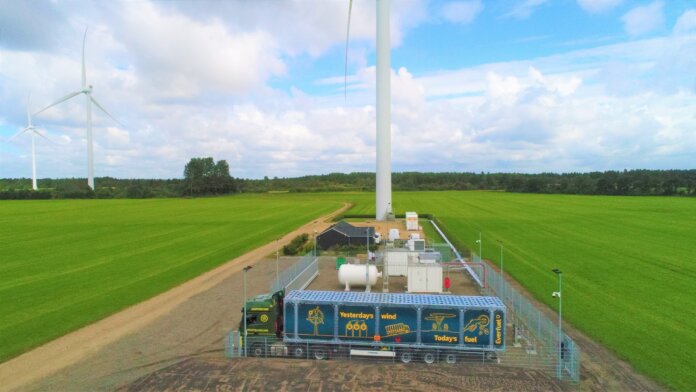 The pilot project now celebrates a new milestone, producing its first green hydrogen as part of the testing and commissioning phase. Project partner Everfuel is distributing this to hydrogen stations in Denmark, enabling a growing number of zero emission vehicles, such as fuel cell taxis, to operate on a 100% green fuel supply.

“Our hydrogen-producing wind turbine is an example of the innovative projects that will help shape the emerging clean-fuel market and accelerate the green energy transition as we integrate unprecedented amounts of renewable energy into the energy system,” says Poul Skjærbæk, chief innovation officer of service at Siemens Gamesa. “We are very proud to have reached yet another milestone in making this vision a reality – getting our first 100 percent green hydrogen out to the consumers.”

The Brande Hydrogen setup couples an existing onshore Siemens Gamesa SWT 3.0-113 DD wind turbine with an electrolyzer stack from electrolysis partner Green Hydrogen Systems. Siemens Gamesa is also using the Brande Hydrogen site to explore whether integrating new battery technology as an upgrade to the co-located turbine and electrolyzer can contribute to grid stability and help address issues around the variability of wind.

“We are pleased to showcase the entire hydrogen value chain, from renewable energy production to the distribution, with our own high-capacity hydrogen trailers and delivery to our fueling stations,” states Jacob Krogsgaard, CEO for Everfuel. “Distributing 100 percent green hydrogen fuel from Brande is a significant milestone for Everfuel, and we are proud to be the first to offtake green hydrogen in island mode from wind energy.”

“The project in Brande is more than just the production of green hydrogen,” adds Krogsgaard. “It symbolizes the beginning of the Danish hydrogen adventure, which will help decarbonize our society and fight climate change.”

This combination also has the potential to expand the output of existing wind projects. Batteries can store energy in a way that allows electrolyzers to run for longer and produce more green hydrogen. If there is a grid connection, the batteries can distribute the renewable energy to the grid rather than the electrolyzer when conditions allow, easing bottlenecks and providing flexibility.

The battery, turbine and electrolyzer setup has the potential to enable the production of industrial-scale volumes of green hydrogen in the near term. Innovations and learnings from the Brande Hydrogen test site will be shared with partners to build use cases for larger-scale green hydrogen production.

Without the production of green hydrogen on an industrial scale, the world will not achieve carbon neutrality by 2050 and the earth’s temperature will continue to rise. Green hydrogen, derived from low-cost, competitive wind power, is a 100% sustainable and versatile fuel which can be stored and transported for use on demand. Green hydrogen can be produced anywhere and used in sectors that are very difficult to decarbonize, such as aviation and shipping, as well as heavy industry, such as iron and steel, chemicals and glass. Hydrogen made from wind can be used to cut emissions from nations and industries that are struggling to limit their impact on the climate.