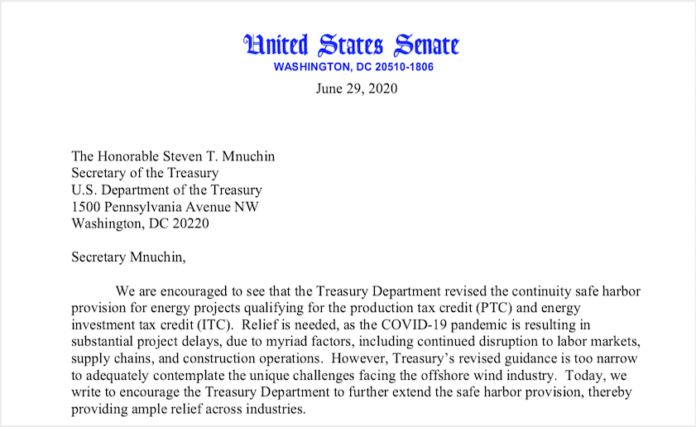 U.S. Senator Bill Cassidy, M.D.,R-La., and chairman of the Senate Energy Subcommittee, led a bipartisan group of nine senators who wrote the Treasury Department asking for a safe harbor extension for offshore wind energy projects that qualify for the production tax credit (PTC) and the investment tax credit (ITC).

The extension would help projects that have been delayed due to disruptions caused by the COVID-19 pandemic.

“On top of construction delays and financial difficulties faced by the entire wind community, offshore developers are facing the significant additional challenges related to permitting offshore in federal waters. Delays from COVID compound other scheduling difficulties, such as those related to coastal weather and ocean wildlife migration patterns, placing further constraints on the industry’s ability to move forward in a timely manner,” says Tom Kiernan, CEO of the American Wind Energy Association (AWEA).

The letter asks the Treasury for broader guidance that can help industries better adapt to the delays created by the pandemic, such as disrupted labor markets, supply chains and construction operations.

“We commend the bipartisan group of senators, led by Sens. Cassidy and Whitehouse, on recognizing the need for a longer timeline to finalize these projects and providing certainty that will allow investments to continue. Making these adjustments to existing policies will provide the industry the flexibility to finally take off, enabling an energy source that is poised to deliver 83,000 jobs and $25 billion of annual economic output within the next decade,” adds Kiernan.

To read the full transcript of the senators’ letter calling for a safe harbor extension for offshore wind, click here.