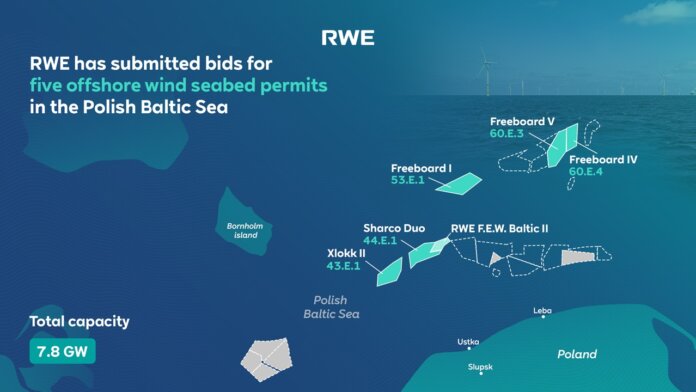 Poland has started competitive processes for five offshore wind seabed permits in the Polish Baltic Sea. RWE has submitted bids for all five areas, with a total capacity of 7.8 GW, including a site 4 called 4.E1, located in the direct vicinity of its F.E.W. Baltic II project.

RWE has developed a comprehensive concept for this particular offshore wind farm, named Sharco Duo. The 1.8 GW site is located northwest of the Słupsk Bank in the central Polish Baltic Sea.

“RWE is clearly committed to contributing to the Polish energy transition by delivering the government’s offshore wind build-out program,” says Sven Utermöhlen, CEO of offshore wind at RWE Renewables. “We are currently developing our first offshore project in the Polish Baltic Sea, with F.E.W. Baltic II. And we are pleased to have submitted bids for five offshore wind seabed permits – with more to follow.”

RWE is expecting extensive synergies with its F.E.W. Baltic II project and operational base in Ustka during the development, construction and operation of Sharco Duo. So the company will be able to provide Poland with green and low-cost electricity.

“Our concept for Sharco Duo consists of state-of-the art offshore wind technology combined with innovative solutions to build and operate the wind farm in harmony with the Baltic Sea ecosystem and to perfectly match the demands of the Polish energy system and reach full grid stability,” explains Grzegorz Chodkowski, vice president of offshore development in Poland at RWE Renewables. “Based on our experience in offshore wind, we are in a perfect position to deliver both Sharco Duo and other offshore wind farms we applied for to simultaneously support local industries and create new, future-proof jobs. In addition, we will foster local research and share the knowledge gained about innovative technologies widely.”

RWE’s unique design concept for Sharco Duo supports the perfect integration of the offshore wind farm into the Polish energy system, including green hydrogen production – offshore and onshore – together with innovative electricity storage solutions. RWE is also planning to support biodiversity and enhance the local ecology, flora and fauna. Safeguarding the ecosystem is also a key issue during construction and operation. Therefore, some of the many eco innovation solutions being proposed by RWE are low-noise foundation installation systems and sustainable usage of recyclable components. Another focus will be on a low-emissions operating strategy.

Thanks to RWE’s extensive involvement in the central Polish Baltic Sea and the synergies with its F.E.W. Baltic II project, which is in the direct vicinity of the 44.E.1 site, RWE is ready to develop and implement the Sharco Duo offshore wind farm and produce the first electricity as early as 2028. Once fully operational, it will be capable of producing enough green electricity to supply 11 million Poles per year.

RWE is also ready to place diversified bids for the other additional areas made available for offshore wind farms by the Polish government. Seabed permits awarded out of this process have the chance to qualify and participate in Contract for Difference (CfD) auctions starting in 2025.