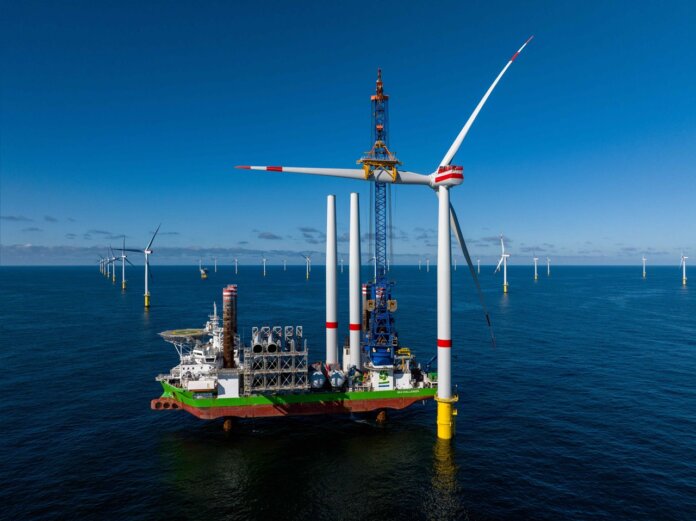 The last turbine at RWE’s Kaskasi wind farm has now been installed 35 kilometers north of the German island of Heligoland. More than two thirds of the wind farm’s 38 turbines are already feeding electricity into the grid. Kaskasi is RWE’s sixth wind farm off the German coast. The entire wind farm is to be operational by the end of the year.

“Together with our partner companies, our team has persistently pushed ahead with the installation of turbines at our sixth wind farm off the German coast,” says Sven Utermöhlen, CEO of wind offshore at RWE Renewables. “Since July, a total of 38 wind turbines have been successfully installed off the island of Heligoland. This is exactly the kind of determination we need, because faster offshore expansion allows us to achieve our climate targets as well as greater energy sovereignty.”

Wind farms like Kaskasi can supply green electricity for at least 25 years. But what happens to the used components after that? Recycling practices have already been established for many of the components, such as the turbine towers. However, recycling the rotor blades has been more challenging. The composite materials used in the rotor blades are cast in resin, making them difficult to separate after decommissioning. That is, this used to be the case – until now. At RWE’s Kaskasi wind farm, some of the turbines are now generating electricity with the world’s first recyclable rotor blades.

The unique feature of the Siemens Gamesa RecycableBlade is its innovative resin, which is the first to allow the component materials to be separated from one another thanks to its special chemical structure. The separation process protects the properties of the materials, allowing them to be reused in other applications – for example, in the automotive industry or in consumer goods such as suitcases and flat screen casings.