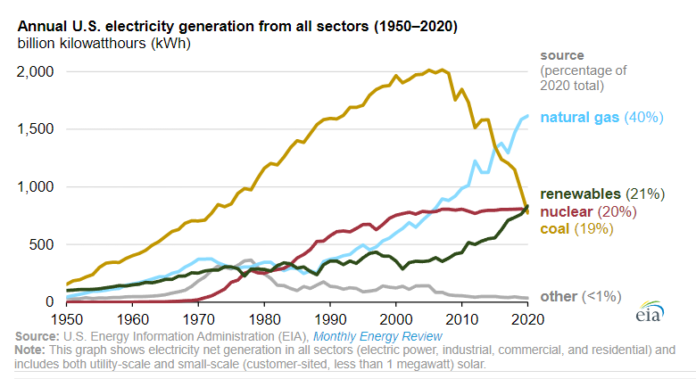 In 2020, renewable energy sources – including wind, hydroelectric, solar, biomass and geothermal energy – generated a record 834 billion kWh of electricity, or about 21% of all the electricity generated in the U.S., according to the U.S. Energy Information Administration (EIA). Only natural gas (1,617 billion kWh) produced more electricity than renewables in the United States in 2020.

Renewables surpassed both nuclear (790 billion kWh) and coal (774 billion kWh) for the first time on record. This outcome in 2020 was due mostly to significantly less coal use in U.S. electricity generation and steadily increased use of wind and solar.

Coal-fired electricity generation in the U.S. peaked at 2,016 billion kWh in 2007, and much of that capacity has been replaced by or converted to natural gas-fired generation since then. Coal was the largest source of electricity in the U.S. until 2016, and 2020 was the first year that more electricity was generated by renewables and by nuclear power than by coal (according to a data series that dates back to 1949). Nuclear electric power declined 2% from 2019 to 2020 because several nuclear power plants retired and other nuclear plants experienced slightly more maintenance-related outages.

EIA expects coal-fired electricity generation to increase in the U.S. during 2021 as natural gas prices continue to rise and as coal becomes more economically competitive. Based on forecasts in EIA’s Short-Term Energy Outlook, coal-fired electricity generation in all sectors in 2021 is expected to increase 18% from 2020 levels before falling 2% in 2022. EIA expects U.S. renewable generation across all sectors to increase 7% in 2021 and 10% in 2022. As a result, it forecasts coal will be the second-most prevalent electricity source in 2021, and renewables will be the second-most prevalent source in 2022. EIA expects nuclear electric power to decline 2% in 2021 and 3% in 2022 as operators retire several generators.