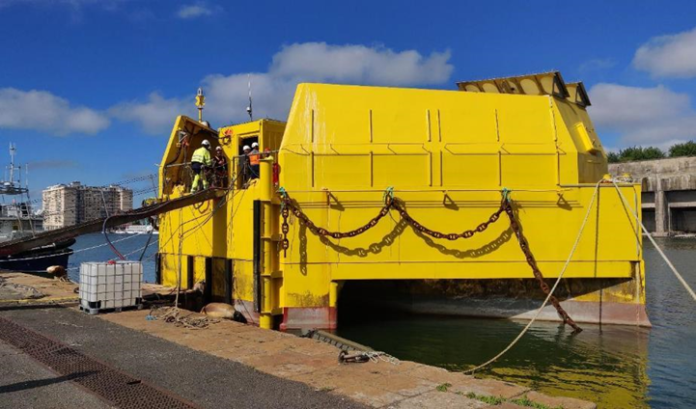 Plug’s marinized EX-425D 1 MW electrolyzer product will be the first electrolyzer operating on a floating platform under extreme conditions. The electrolyzer system has been marinized to meet acceleration, tilt and other marine specifications.

The project, named Sealhyfe, will be operated for six months at the pier, then for 12 months off the coast of Le Croisic at the offshore testing site SEM-REV by French engineering school Centrale Nantes.

BW Ideol and Centrale Nantes announced that the offshore hydrogen production unit will be powered by BW Ideol’s floating offshore wind turbine operating successfully off France’s west coast since 2018. The Sealhyfe facility will be, after a phase of dockside tests, connected to BW Ideol’s floating wind unit anchored and operating at the Ecole Centrale de Nantes’ SEM-REV site for the last four years.

“Lhyfe’s project is an important and much needed step towards the development of integrated and autonomous renewable power production systems, using floating wind and green hydrogen in this specific instance. Developing such solutions is essential to accelerate the energy transition,” says Paul de la Guérivière, CEO of BW Ideol. “Being the floating wind asset owner and being responsible for the day-to-day operations and maintenance of the asset, we look forward to studying all aspects of the interaction between the wind turbine and the hydrogen production system. This added return on experience will further contribute to BW Ideol’s unique preparedness for the development and execution of future commercial-scale deployments.”

“This exceptional demonstrator, tested on the SEM-REV offshore test site, associates Centrale Nantes with a strong ambition: to make offshore renewable hydrogen a reality. This world premiere is a source of great pride for the school,” mentions Jean-Baptiste Avrillier, director of Centrale Nantes. “This ambitious project confirms the role of our SEM-REV site in accelerating the development of renewable marine energies and the active contribution of the school to meet the challenges of energy transition.”

“This inauguration of Sealhyfe marks a pivotal moment for Plug and Lhyfe, demonstrating that green hydrogen is possible, not just in onshore projects, but offshore too,” says Andy Marsh, CEO of Plug. “We’re proud to be instrumental in creating the world’s first offshore green hydrogen project, another first for Plug, Lhyfe and the world.”

Sealhyfe is supported by the French energy and environment agency ADEME and the Pays de la Loire Region. The project was developed by a consortium, led by Lhyfe, who has managed all the engineering studies and will operate the production site, and includes Chantiers de L’Atlantique, GEPS Techno, Eiffage Énergie Systèmes, the Port of Saint-Nazaire and Kraken Subsea Solutions. The Plug-Lhyfe partnership expects to work together on future commercial offshore electrolyzer plants.