The total investment for the project is multi-trillion won, and the large-scale investment related to the Korean Green New Deal will lead to various positive ripple effects, such as the creation of a construction base, supply of equipment and job creation.

Under the two MoUs, the companies have agreed to contribute to the growth of offshore wind power in Korea and to support the country’s carbon neutrality targets by exploring key areas of collaboration on Ørsted’s Incheon offshore wind project. The exploration will encompass renewable energy certificate (REC) offtake, joint operation and partnerships, as well as technology exchange for offshore wind O&M, while working towards a broader collaboration on developing renewable energy in Korea.

“The MoUs with KOSPO and KOMIPO, two leading Korean utilities who could be the future off-takers of Renewable Energy Certificates from the Incheon offshore wind farm, takes us an important step closer towards developing this flagship project,” says Martin Neubert, deputy group CEO of Ørsted. “We are confident that by leveraging our more than 30 years of global experience as well as the know-how and local expertise of our partners, we will adapt to the Korean market and create local benefits, economic opportunities, and make a significant contribution by supporting Korea in achieving its ambitious 12 GW offshore wind target.”

“The MoU with Ørsted, the world’s leading company in the offshore wind industry, will be of great help to our company’s expansion of the new and renewable energy business,” states Seung-Woo Lee, president of KOSPO. “I expect that it will not only help achieving the government’s energy transition goal, but also speed up Korea’s large-scale offshore wind power development.”

Ørsted, KOSPO and KOMIPO plan to locate the Incheon offshore wind project more than 70 km from the Incheon coastline to strive for a win-win cooperation with local residents and fishermen in Incheon and to minimize impact on the environment and fishing waters. Through these agreements, the two utilities plan to fulfil their social responsibility by applying a business model that works both for local residents and the environment. 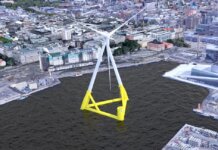