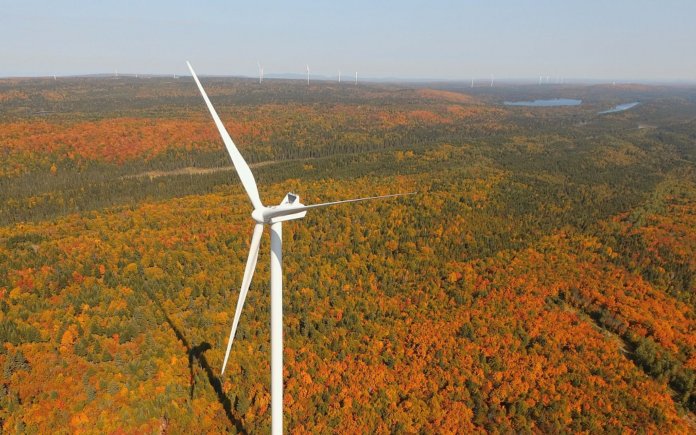 The wind farm is situated on the private and public lands of TNO Boisbouscache and the municipalities of Sainte-Françoise, Saint-Mathieu-de-Rioux, Saint-Médard (RCM Basques) and Saint-Eugene-de-Ladrière (RCM of Rimouski-Neigette).

The project represents an investment of more than C$500 million. Construction commenced in June 2016 and employed over 400 workers during its peak.

In addition to the profits distributed to municipal shareholders, an annual contribution of over C$1.1 million will be provided to the Bas-Saint-Laurent and Gaspésie regions, particularly to the Basques and Rimouski-Neigette RCMs throughout the 25-year contract with Hydro-Québec.

Cory Basil, vice president of development for EDF EN Canada, says, “This project is the result of a partnership that pairs the experience and expertise of EDF EN Canada with the understanding of local expectations brought by our public partners.”

Nicolas-Riou is one of eight wind projects awarded to EDF EN Canada through Hydro-Québec Distribution’s call for tenders in 2008, 2010 and 2013. Since 2008, EDF EN Canada has placed in service 1.6 GW of wind and solar projects in Canada.