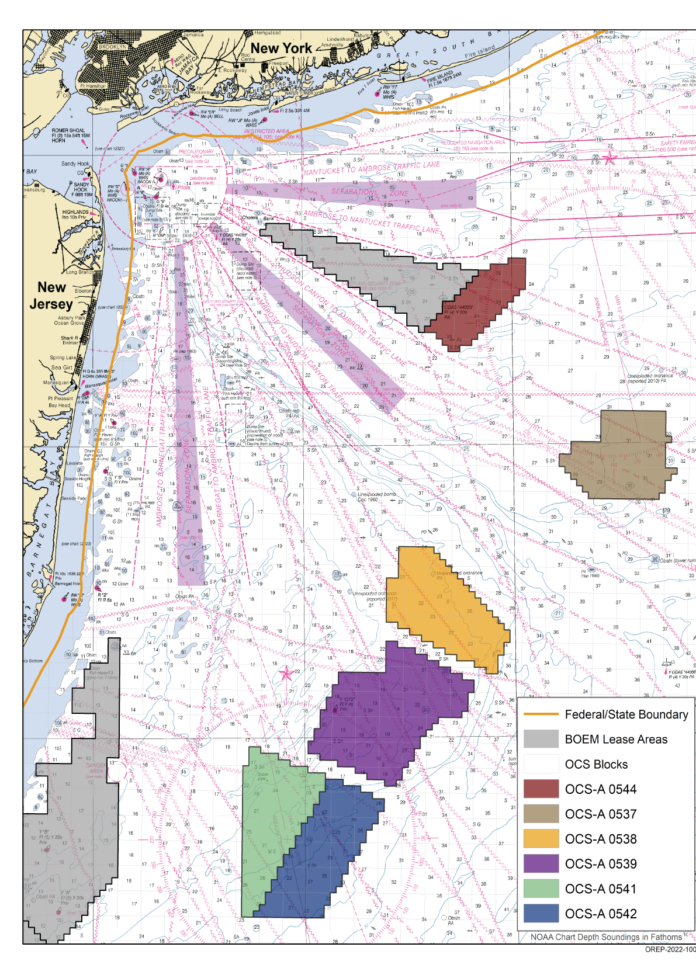 “This week’s offshore wind sale makes one thing clear: the enthusiasm for the clean energy economy is undeniable and it’s here to stay,” says Secretary Deb Haaland. “The investments we are seeing today will play an important role in delivering on the Biden-Harris administration’s commitment to tackle the climate crisis and create thousands of good-paying, union jobs across the nation.”

A map of the lease areas auctioned can be found here.

Through its Bight Wind LLC joint venture, RWE Renewables has secured area OCS-A 0539 with a winning bid of $1.1 billion. The awarded seabed has the potential to host about 3 GW of capacity, enough to power 1.1 million U.S. homes. The project is expected to be in operation by the end of the decade.

TotalEnergies has been named a winner of maritime lease area OCS-A 0538. The bid for $795 million was made by both TotalEnergies and EnBW. Located up to 47 nautical miles from the coast, the lease covers a 132 square miles area with a generation capacity of at least 3 GW. The project is expected to come online by 2028.

Invenergy will serve as lead developer of the project. A consortium of investors, led by the sponsors and composed of Blackstone Infrastructure Partners, CDPQ, FirstLight Power and Ullico Infrastructure Fund, will provide funding for the project.

Before the leases are finalized, the Department of Justice and Federal Trade Commission will conduct an anti-competitiveness review of the auction, and the provisional winners will be required to pay the winning bids and provide financial assurance to Interior’s Bureau of Ocean Energy Management (BOEM).

The New York Bight offshore wind leases include innovative stipulations designed to promote the development of a robust domestic U.S. supply chain for offshore wind energy and enhance engagement with Tribes, the commercial fishing industry, other ocean users and underserved communities. The stipulations will also advance flexibility in transmission planning. Stipulations include incentives to source major components domestically – such as blades, turbines and foundations – and to enter into project labor agreements to ensure projects are union-built.

“We must have a robust and resilient domestic offshore wind supply chain to deliver good-paying, union jobs and the economic benefits to residents in the region,” comments Amanda Lefton, BOEM’s director. “Because we understand the value of meaningful community engagement, we are requiring lessees to report their engagement activities to BOEM, specifically noting how they’re incorporating any feedback into their future plans.”

To advance the Interior Department’s environmental justice and economic empowerment goals, lessees will be required to identify and make efforts to engage with Tribes, underserved communities and other ocean users who could be affected by offshore wind energy development. The Department will hold companies accountable for improving their engagement, communication and transparency with these communities.

BOEM initially asked for information and nominations of commercial interest on 1.7 million acres in the New York Bight. Based on BOEM’s review of scientific data and extensive input from the commercial fishing industry, Tribes, partnering agencies, key stakeholders, and the public, BOEM reduced the acreage offered for lease by 72% to avoid conflicts with ocean users and minimize environmental impacts. BOEM will continue to engage with the public, ocean users and key stakeholders as the process unfolds.