The New York State Board on Electric Generation Siting and the Environment has granted approval to Eight Point Wind LLC – an affiliate of NextEra Energy Resources – to build and operate a wind facility in Steuben County, N.Y.

The siting board says its decision followed a rigorous review and public participation process.

“In keeping with Governor Andrew M. Cuomo’s goal to develop clean energy resources in New York State and nation-leading Green New Deal, we are proud to approve construction of this appropriately sited wind farm,” says John B. Rhodes, chair of the siting board.

The 101.8 MW Eight Point wind farm, as approved, will consist of 31 wind turbines to be located on leased or purchased land. In addition to the turbines, the project will also include the construction of access roads, a collection substation, mostly underground 34.5 kV collection lines, up to two permanent meteorological towers, temporary staging and laydown areas, an operations and maintenance building, and other related facilities.

The project will be located in the towns of Greenwood and West Union. Eight Point Wind also proposes to construct an approximately 16.5-mile, overhead, 115 kV transmission line that would interconnect the project with New York State Electric and Gas Corp.’s existing 115 kV Bennett substation in the town of Hornellsville. The proposed transmission will be subject to review pursuant to Article VII of the Public Service Law. It was not reviewed as part of the proposed project in this proceeding.

As described by the developer, the project would have positive economic impacts on the host communities. Construction is expected to create 103 direct construction-related jobs, estimated to pay $17.5 million in local payroll. Eight Point Wind also expects that six permanent jobs will be created during operation, with an associated local payroll of approximately $500,000. Additionally, the developer expects to pay upwards of $25 million to participating landowners and millions to the local community through PILOT payments. Eight Point Wind will also separately pay the towns upwards of $300,000 each year through host community agreements. 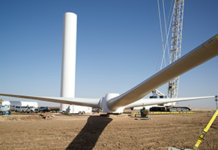