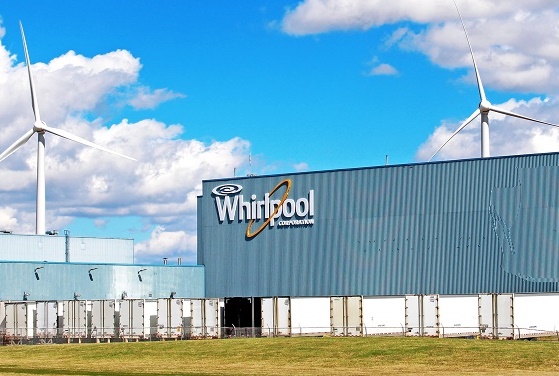 American companies are increasingly making their own power – and sales – with wind turbines located near the factories and buildings that consume the power they make, says a recent report from the U.S. Department of Energy (DOE).

According to the DOE’s Pacific Northwest National Laboratory (PNNL), the 2015 Distributed Wind Market Report offers the fourth annual analysis of distributed wind power (generating wind power near where it will be used, instead of purchasing power from large, centralized wind farms).

“Wind plays a key role in the rising area of distributed energy,” says report co-author Alice Orrell, an energy analyst at the PNNL.

The reports find that 37% of the new distributed wind capacity added in 2015 was for industrial uses, including factories, processing plants and operation facilities. Companies using distributed wind include the Whirlpool and Ball corporations in Ohio, soap manufacturer Method in Illinois and Stafford County Flour Mills in Kansas.

Ohio, Nebraska and Connecticut led the U.S. in new distributed wind power capacity in 2015 – respectively adding 7.7, 7 and 5 MW (due to a large project in each of those states), the report says.

The estimated cost of energy made from a sample of small distributed wind turbines was $0.11/kWh in 2015, compared to overall residential electric rates that run between about $0.09 and $0.21 in the continental U.S., according to the report.

More information can be found in the full report.