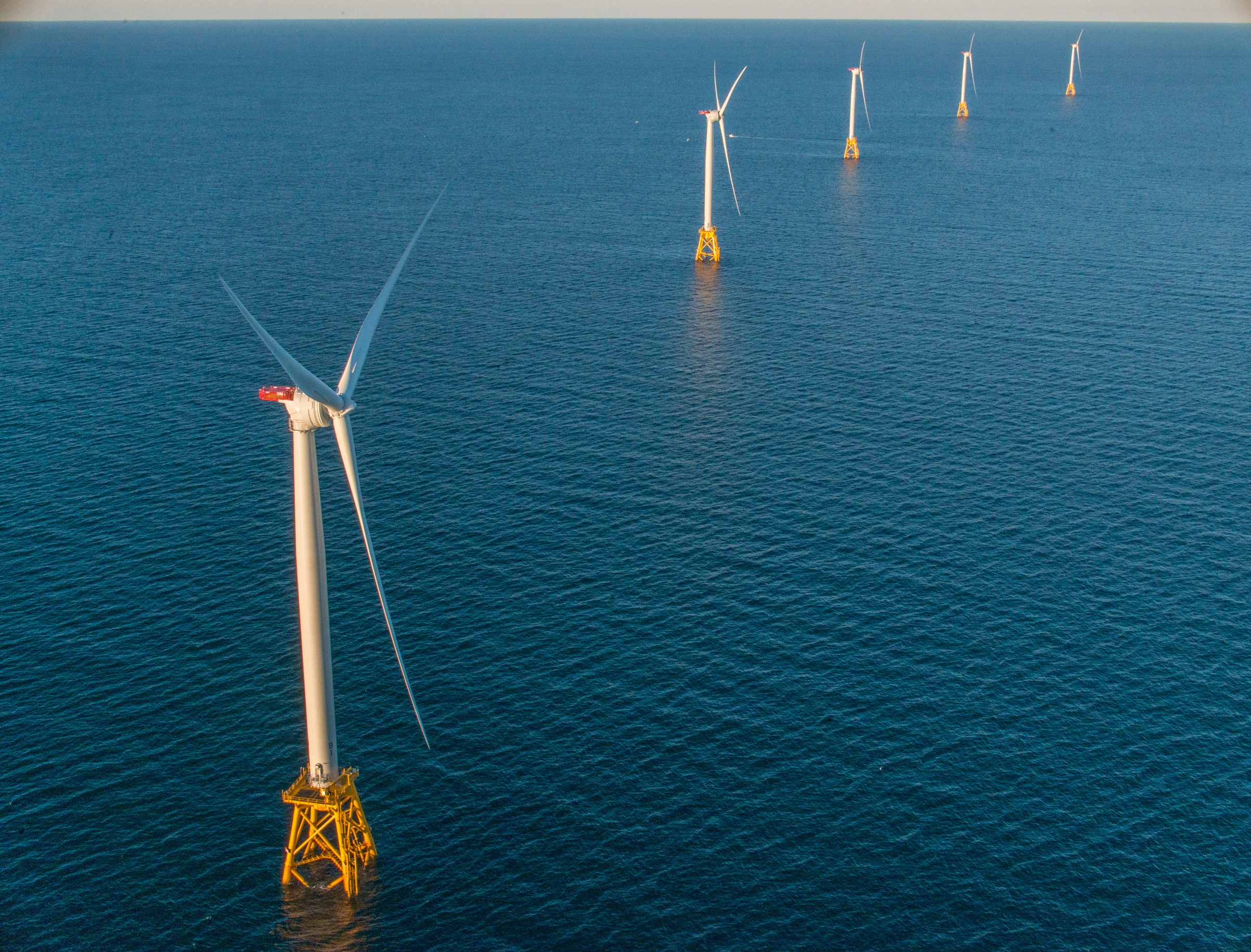 North American Windpower has been covering Deepwater Wind since 2009 – about the same time when the offshore wind developer was named Rhode Island’s preferred developer provider. Therefore, when the National Wildlife Federation (NWF) offered a chance to tour the 30 MW Block Island Wind Farm – the first in the U.S. – we jumped at the chance.

Although NAW has chronicled the Block Island Wind Farm since its inception, you get deeper appreciation viewing these massive machines up close and personal in the marine environment. If you’re ever afforded the opportunity – as we were – be sure to consider the following.

Dress appropriately – and hang on. From the dock of Rhode Island Fast Ferry, located at Rhode Island’s Quonset Point, it is approximately a 55-minute ride on the Ava Pearl fast ferry across Narragansett Bay. As the tour operator opens up the throttle, the whipping wind will send you back inside the enclosed cabin. You’ll pass underneath the Jamestown Verrazano Bridge while following Rhode Island’s south county coastline. Once the boat passes the Point Judith Lighthouse, it’s a straight shot out to the turbines.

[Later, when the boat idles for a closer view of the wind turbines, the wind has subsided. But, the five-foot swells at the turbines made for some serious rocking and rolling. For the uninitiated: The best way to describe five foot swells? The steady roller-coaster-like motion is enough to test the constitution of the most-hardened onlooker.]

Watch for marine mammals – As we were making our way out toward the turbines, one particular onlooker discovered the presence of six Atlantic White-Sided Dolphins following the boat just off the bow. According to NWF, the dolphins makes themselves at home – even with the ferry in proximity – as the mammals like to frolic in the ferry’s wake. To watch the dolphins playing in the waves, click here.

Check out the lighthouses – As its nickname attests, they don’t call Rhode Island “the Ocean State” for nothing. As such, the shore is dotted with several classic New England lighthouses, including Point Judith, Plum Beach and Dutch Island. In this mid-October day, these postcard-perfect structures serve as true New England icons.

Consider the (fuel) source – The U.S.’ first offshore wind farm will serve 90% of the island’s load – with lower electricity rates expected. That’s right. Currently, the island is powered by diesel. As such, Block Island’s ratepayers – who pay up to $0.50/kWh – $0.60/kWh during peak summer periods – will see their electric rates go down as much as 40%.

The project’s 30 MW nameplate capacity is also more than enough output to cover the demand, which peaks to 3 MW to 4 MW during the summer. Thanks to the wind farm’s bi-directional undersea cable, Deepwater Wind feeds the excess output back into National Grid’s power grid. In total, the 34.5 kV cables measure close to 30 miles long and weigh 1,800 tons. The cables – which have a diameter of 6.77 inches – are buried between four and six feet in the seabed.

Look for the solar panels – Unsurprisingly, the project makes good use of solar photovoltaic panels, which are present at each of the five turbines. According to Deepwater Wind, the solar panels power the navigation aid and obstruction lights.

Prepare to have your breath be taken away – Seeing the wind turbines up close is awesome – in the truest sense of the word. In fact, the tour operator came within 30 feet of the turbines, close enough to clearly read the aptly named print: BIWF 1. The five GE Haliade 150-6 MW direct-drive wind turbines are mounted on jacket-style foundations and stand 70 feet above the water. The blades, manufactured by LM Wind Power, stretch 600 feet in the air when the blade is vertical.

“It’s all about the most efficient layout to catch the wind,” he said. “It just so happens that it creates a very elegant arc.”

Having dove R.I., this has to be one of the most beautiful U.S. sea coasts and the best backdrop for such a really futuristic design thanks to GE and the Vision the Developers had; well done to the Deepwater Wind Team! You’ve begun what will become new N.E. coast projects to be – I can’t wait to see how NY will turn out, per lease area provided by BOEM overlaid on NY charts looked just incredible! And thank you Mr. Del Franco and NAWind. Capt. Juan R Matuté, Licensed Master Offshore CHARTER 1 ™ LLC Offshore Services & U.S. Govt.… Read more »

very cool. I can only hope in Canada we can move past the political rhetoric to get our own offshore wind farms up and running one day soon! Congrats to the US for moving this forward. Here’s to many more!