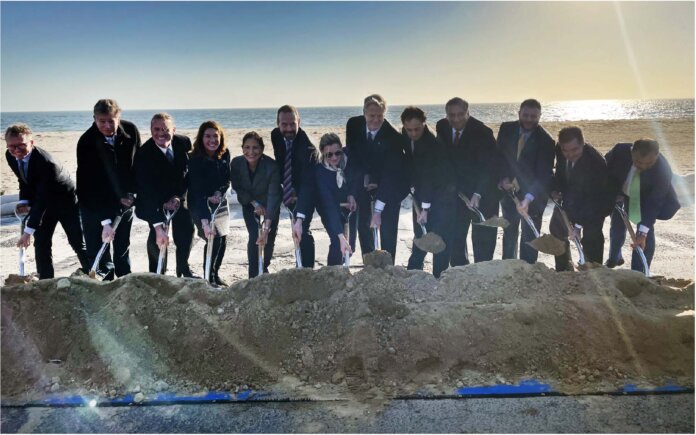 The 800 MW project, located 15 miles off the coast of Martha’s Vineyard, will generate electricity for more than 400,000 homes and businesses, create 3,600 full time equivalent job years, save customers $1.4 billion over the first 20 years of operation, and reduce carbon emissions by more than 1.6 million metric tons per year.

Under the project labor agreement with the Southeast Massachusetts Building Trades, the work being done on site is using local union labor. The agreement ensures that at least 500 of the jobs created during the construction phase of the project will be filled by local tradespeople and includes aggressive hiring targets for women and black, indigenous and people of color.

The project will use 62 GE Haliade-X 13 MW wind turbines that will be connected to an offshore substation, where the power will be transferred to two export cables that will make landfall at Covell’s Beach and connect to the grid at an inland substation.

“Many people have worked extremely hard to make today possible – a day where we turn forward-thinking into action,” said Vineyard Wind CEO Lars T. Pedersen. “From the environmental and community activists to our elected leadership at the local, state and federal level, it’s taken all of us, pulling in the same direction and not being deterred by setbacks both large and small.”

“Massachusetts is proud to launch an entirely new industry in the United States by building this historic, first-in-the-nation project,” remarked Massachusetts Gov. Charlie Baker. “By officially beginning onshore construction on the Vineyard Wind project, we are charting a new course for clean energy and climate action.”

Vineyard Wind 1 is scheduled to be under construction through next year and begin delivering electricity to the grid in 2023.