“Wind power is leading the charge in the transition away from fossil fuels,” says Steve Sawyer, secretary general of GWEC. “Wind is blowing away the competition on price, performance and reliability, and we’re seeing new markets open up across Africa, Asia and Latin America – which will become the market leaders of the next decade. Wind power led new capacity additions in both Europe and the United States, and new turbine configurations have dramatically increased the areas where wind power is the competitive option.”

GWEC says that as a result of its extraordinary annual market, China has edged past the European Union (EU) in terms of total installed capacity, with 145.1 GW compared to the EU’s 141.6 GW. The Chinese government’s drive for clean energy, supported by continuous policy improvement, is motivated by the need to reduce dependence on coal, which is the main source of the choking smog strangling China’s major cities, as well as growing concern over climate change.

Elsewhere in Asia, India chalked up a respectable 2,623 MW, pushing past Spain into fourth place in terms of cumulative capacity, after China, the U.S. and Germany; and Japan, South Korea and Taiwan added some new capacity, as well.

In the U.S., GWEC says more than 5,000 MW was installed in a remarkable fourth quarter, which resulted in an annual market of 8,598 MW and a cumulative total of 74,471 MW. Due to the five-year production tax credit extension passed in 2015, GWEC adds, the future looks very bright for the U.S. wind business, with longer market visibility than it’s ever had before.

Despite its economic and political woes, Brazil installed a record 2,754 MW, with cumulative capacity reaching 8.7 GW. Uruguay took a giant step closer to its goal of 100% renewable energy with a 2015 market of 316 MW, bringing cumulative installations to 845 MW. New wind power was also added in Panama, Chile, Costa Rica, Honduras, Guatemala and Argentina.

Progress in Australia was slow, but it did add 380 MW to push the country’s total installations to over 4 GW.

“2015 was a big year for the big markets: China, the U.S., Germany and Brazil – all of which set new records,” says Sawyer. “But there is a lot of activity in new markets around the world, and I think in 2016 we’ll see a broader distribution.” 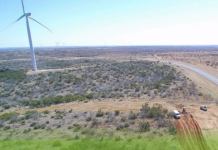