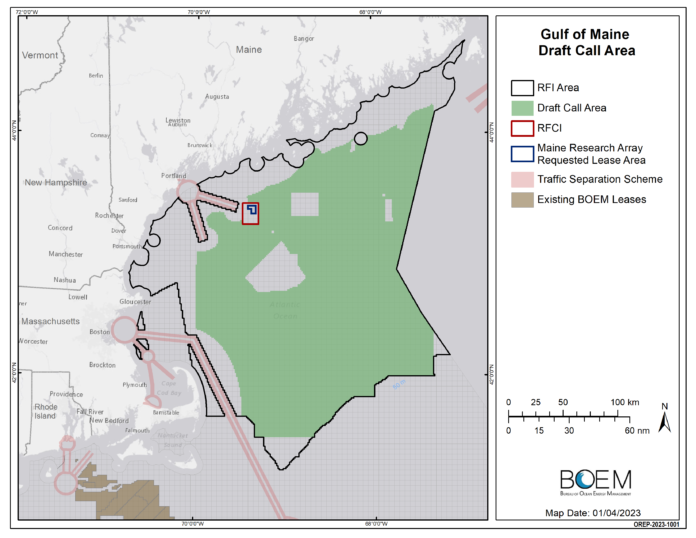 In August 2022, the Department of the Interior announced a Request for Interest (RFI) to gauge whether there is commercial interest in obtaining wind energy leases within an area in the Gulf of Maine consisting of about 13.7 million acres. BOEM reviewed the public input received in response to the RFI and worked collaboratively with National Oceanic and Atmospheric Administration’s (NOAA) National Center for Coastal and Ocean Science (NCCOS) to conduct a spatial analysis of the RFI area.

In response to public input and the spatial analysis, BOEM has decided to reduce the RFI area by about 27%, to 9.9 million acres.

BOEM is requesting feedback on the reduced RFI area, as well as input on the model being developed in partnership with NCCOS. This model will be used in the next phase of the planning process to aid in the identification of offshore areas that are the most suitable for commercial wind energy activities, while minimizing potential conflicts with marine life and all ocean users.

BOEM will hold three in-person and several virtual opportunities to hear from ocean users and other interested parties firsthand.

Good morning, Part of me continues to ask this “industry” why constructing man made offshore islands with Rip Rap rock boulders the size of the granite boulders protecting the Galveston Island shoreline beyond the City of Galveston, Texas Sea Wall at right angles in these areas is not being done. These plans would benefit from Adam Fullers patented and w ind tunnel tested vertical axis wind turbines. Why Adam Fullers VAWT design is not being considered by the Department Of the Interior that could be stacked and mounted on shorter towers is not being considered is very obvious to me… Read more »