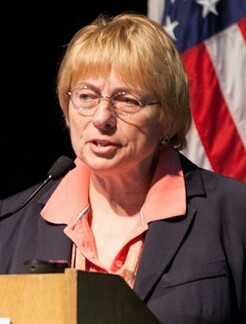 During her remarks at the E2Tech 2019 Conference this morning, Gov. Janet Mills, D-Maine, announced that Maine has joined the United States Climate Alliance, a bipartisan coalition of 21 states committed to reducing greenhouse-gas emissions consistent with the goals of the Paris Agreement.

To help accomplish this goal and identify other steps that can be taken to combat climate change, Mills – who took office at the beginning of 2019 – also announced that her administration will introduce legislation to create the Maine Climate Council.

“Today I am excited to announce that Maine is now the 22nd member-state of the United States Climate Alliance,” she said. “While the federal government ignores its responsibility to combat climate change, Maine will work with states across the country to meet the goals outlined in the Paris Climate Accord.”

“Climate change is already impacting Maine’s communities and the Northeast region through extreme precipitation and coastal flooding,” comments Julie Cerqueira, executive director of the U.S. Climate Alliance. “Governor Mills understands the urgency of this issue, and by joining the U.S. Climate Alliance, she is setting the stage for Maine to lead on climate action through priorities like investing in local renewable energy production and enhancing the state’s natural and working lands.”

According to Mills, the state’s new council “will be responsible for developing an action plan and a timetable to meet our emission-reduction goals and to ensure that Maine’s communities and economy are resilient to the effects of climate change.”

It will consist of commissioners and state leaders, science and technical experts, nonprofit leaders, and representatives of climate-impacted industries. It will be established in statute, solicit public input and report regularly to the public on progress toward goals.

With the council’s leadership, Maine is aiming to achieve 80% renewable energy in the electricity sector by 2030 and 100% by 2050, the governor said.

Mills also emphasized that additional climate change initiatives will be announced in the coming months.

Dylan Voorhees, climate and clean energy director at the Natural Resources Council of Maine, says in a statement, “As the governor said, Maine people, communities and businesses overwhelmingly recognize that climate change is a reality we must confront. Increasingly, we also see the need to reduce carbon pollution as an opportunity for Maine. Taking advantage of energy efficiency and Maine’s abundant clean, local renewable energy resources means sending fewer of our hard-earned dollars out of the state economy in exchange for costly, unpredictable and polluting fossil fuels.”