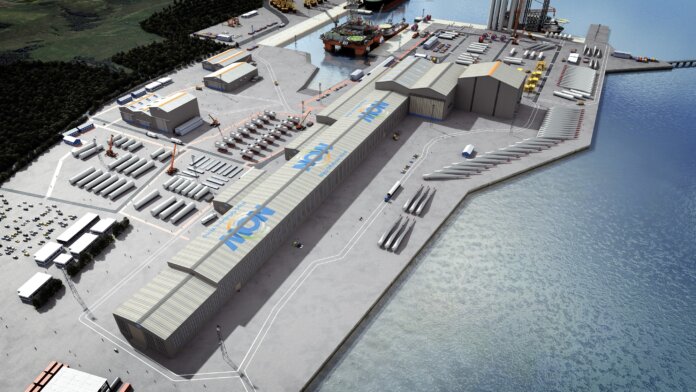 Nigg Offshore Wind (NOW) will be a 450-meter-long factory capable of rolling steel plate to supply towers that will weigh in excess of 1,000 tons each. The towers will be provided to the offshore fixed and floating wind industry in the U.K. and abroad.

“The continued focus on a just transition to a carbon neutral economy has received fresh impetus as a result of the impact of COVID-19 and the Scottish and U.K. governments are looking for opportunities presented by the now inevitable energy transition from a dependency on hydrocarbons to clean and sustainable sources of energy, to create jobs and generate sustainable economic growth,” states Tim Cornelius, CEO of GEG. “The announcement of a state-of-the-art tower rolling factory at the Port of Nigg can and will be a leading example of the ‘green recovery’ in action.”

“Haizea is delighted to be partnering with GEG to develop a state-of-the-art tower rolling facility at the Port of Nigg in Scotland,” comments Borja Zarraga, CEO of Haizea. “We know how important local content is for our clients and customers, and I am very confident that when the GEG reputation for manufacturing excellence and the physical location of the Port of Nigg is combined with our experience, client base, track record and know-how, we will together deliver best-in-class, cost competitive towers to the fixed and floating offshore wind market for many years to come.”

“Global Energy Group has exciting plans for a world-class tower factory at Port of Nigg and our investment in the planned manufacturing facility demonstrates our continuing commitment to do what we can to support the development of a competitive Scottish supply chain and create local jobs,” adds Alistair Phillips-Davies, CEO of SSE.

“In addition to the debt funding, SSE also looks forward to fulfilling its role as a strategic backer and placing orders with the factory to meet our growing offshore wind pipeline in the near future,” Phillips-Davies adds. “SSE is in a unique position with projects of scale, such as Dogger Bank and Berwick Bank, to create sustainable, long-term supply chain opportunities such as at Nigg and the new GE blade factory in Teesside.”

SSE Renewables will be the largest single U.K.-based strategic backer behind the NOW plans, along with senior debt being provided (subject to due diligence and approvals) by Sequoia Economic Infrastructure Income Fund.

“We are pleased to be involved with this important project, which will support the continued growth of the U.K. offshore wind industry, help create highly-skilled and well-paying jobs in the U.K. and further add to our portfolio of projects with positive ESG characteristics,” states Greg Taylor, director of Sequoia Investment Management Company. “We look forward to working with the Global Energy Group team and our other partners to support a transition to a carbon-neutral economy.”

Global wind and solar company Mainstream Renewable Power is lending £5 million in debt, as well as being a strategic partner in the long-term development of the facility.

“Mainstream has consistently viewed the development of local supply chains as a vital part of the growth of Scotland’s emerging offshore wind sector,” mentions Mary Quaney, CEO of Mainstream Renewable Power. “We are delighted to be able to work with Global Energy Group and all our partners, and to leverage our experience over the last fifteen years in offshore wind to create a sustainable supply chain for Scotland.”

The factory is expected to receive funding support from the Scottish Government via Highlands and Islands Enterprise, and the U.K. government via the offshore wind manufacturing investment support scheme. U.K. government funding is subject to the completion of ongoing due diligence.

“This significant investment in Scotland’s energy sector is testament to the skills, expertise and innovation within our industry,” says First Minister Nicola Sturgeon. “We are delighted to financially support this cutting-edge offshore wind towers facility, through Highlands & Islands Enterprise, as it reaches this significant milestone that will deliver high value, green jobs and bring multiple benefits to communities across the Highlands and beyond while playing a pivotal role in delivering offshore renewables growth in Scotland and further afield.”

The facility has been designed to supply towers and other large tubular components suitable for both the fixed and floating offshore wind markets. Whilst the initial contracts for tower supply will focus on U.K. domestic supply, it is anticipated that the factory will be in high demand for export of towers and other products as well due to the rapid rate of planned offshore wind deployment across Europe up until 2050.

The factory design will integrate cutting-edge robotics and welding inspection technology originally developed for the offshore oil and gas industry. Regional staff historically employed in the oil and gas industry will have the opportunity to be re-trained and upskilled at the Nigg Skills Academy to allow them to operate the machinery required to roll these giant structures.

The U.K. government has committed to 40 GW of installed offshore capacity by 2030, bringing overall U.K. wind capacity to over 50 GW. At the current size of turbine used in the market, it means the U.K. needs more than 3,000 towers to reach this target. However, the U.K. currently does not have a factory capable of producing towers to the specification required for future planned projects by fixed and floating developers.

The Port of Nigg rolling facility will be capable of producing up to 135 towers per year as well as other structures for the offshore wind industry, such as transition pieces, suction buckets and bespoke tubular structures for the floating offshore wind market in the U.K. and abroad. The cost of the new facility, inclusive of rolling machinery robotics and a new blast and paint shop is £110-120 million. The new factory is part of establishing the Port of Nigg as a strategic offshore wind hub, which includes the consolidation of the Port’s existing marshalling and staging work for turbine components and foundations.

“We have to acknowledge the immense financial, technical and commercial support we have received from SSE Renewables who have worked tirelessly with us for the past two years to make this dream a reality,” Cornelius adds. “Without the support of SSE, this factory would not be built. We also have to thank Mainstream Renewable Power for their drive and commitment to securing this key strategic asset for Scotland. They have played a pivotal role in making this happen. Both companies are taking leadership positions that the rest of the sector should seek to emulate. They are putting their money where their mouths are, and we will now look to repay the faith they have in us by creating an indigenous supply chain that will be the envy of Europe.”