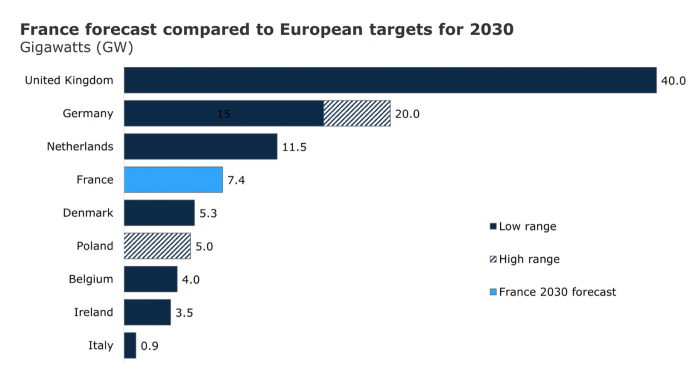 France’s ambition to increase electricity production from renewable energy sources will make the country Europe’s fourth-largest offshore wind power producer in 2030, with 7.4 GW of capacity in operation. The development is going ahead despite any potential cost or supply chain issues from COVID-19.

According to France’s updated energy doctrine, 8.75 GW of capacity will be made available through tenders from 2020 to 2028. The plan aims to lift the awarded capacity to 12.4 GW by 2028.

Rystad Energy estimates that France will be able to reach a total installed capacity of 7.4 GW by 2030, surpassing that of other well-established offshore wind countries such as Belgium and Denmark, which have 2030 targets of 4 GW and 5.3 GW, respectively. And with an additional 5 GW of capacity lined up for planned tender rounds in 2024 to 2028, France is expected to retain this position well into the 2030s.

By 2030, this rapid development will place France only behind the U.K., which is expected to have an offshore wind installed capacity of around 40 GW, Germany (between 15-20 GW) and the Netherlands (11.5 GW).

“Recent developments suggest that France is now picking up the pace. France’s target for operational capacity in 2023 is 2.4 GW, a target expected to be reached through the completion of already awarded projects,“ says Alexander Fløtre, vice president and product manager of offshore wind at Rystad Energy.

The French government also plans to organize three separate tenders for floating wind in 2021-2022, each of which will have 250 MW of capacity. The first, in 2021, will be in the Southern waters of Brittany (Bretagne Sud), while the other two in 2022 are planned for areas in the Mediterranean. Another 1 GW of grounded offshore wind will be tendered in 2023, the location of which has not yet been determined.

From 2024 to 2028 the French government plans to award 1 GW of capacity per year, which can be grounded, floating, or a mix of both. The amount of floating capacity to be awarded will depend on its cost competitiveness compared to the more established grounded alternative. 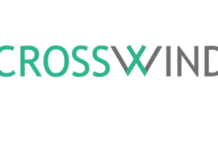 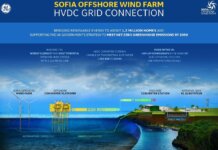