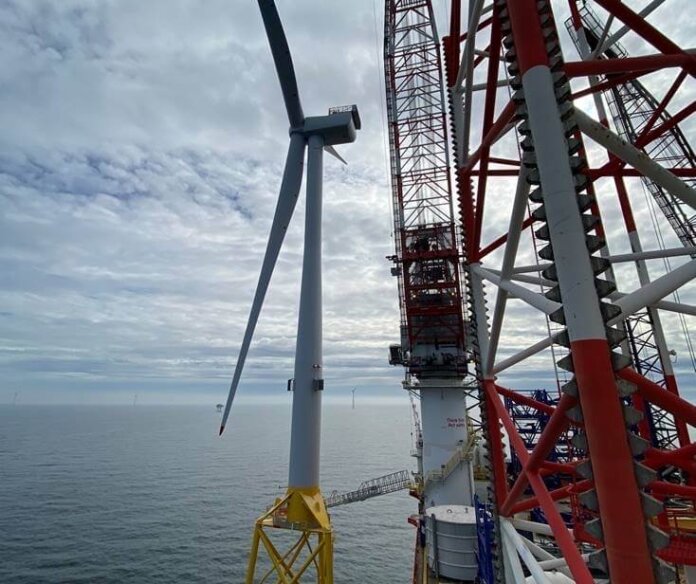 Bold Tern installed the first turbines on Moray East in January but was later replaced by Blue Tern to undergo a scheduled crane upgrade. A carefully planned vessel substitution was successfully carried out in May. Blue Tern was delivered fully loaded on the Moray East site, and the overlap helped to improve the project schedule.

Moray East is located at Moray Firth, 22 km off the east coast of Scotland, using Port of Nigg as the onshore pre-assembly port. The project is developed by Moray Offshore Windfarm East Ltd., which is a joint venture company owned by Ocean Winds, Diamond Green Ltd. and CTG.

“Once again, it has been a pleasure to work with the crew from Fred. Olsen Windcarrier to install the Moray East project’s 100 V164-9.5 MW turbines,” says Allan Birk Wisby, project director at Vestas. “The world-class vessels, Bold Tern and Blue Tern, as well as the experienced crew and installation teams have enabled the project to be installed swiftly throughout the project. The delivery of the final turbine at Moray East project is a key milestone for the whole team, particularly amidst the challenges of the past year.”

“In the face of unprecedented global conditions, we have safely completed the installation of 100 turbines within the challenging timescale of a single season, and I would like to thank and congratulate all those involved in achieving this milestone safely,” adds Enrique Alvarez, project director of Moray East. “Offshore wind technology is developing rapidly, and a collaborative approach throughout the supply chain enabled us to work with vessels and crew at the leading edge of the sector, contributing to our early success.”