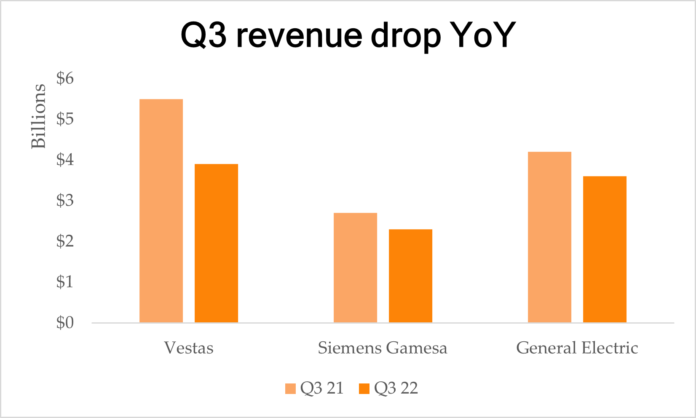 The wind industry has hit several speedbumps in the last few months, illustrated by the poor results for Q3 2022 published by western wind turbine specialists such as Vestas, Siemens Gamesa and GE. Until now it has been unclear as to how badly the wind power sector has been affected by factors such as the Russia-Ukraine war and attempts at recovery from the pandemic, all of which have driven up prices in solar and battery manufacturing and installs. But now, according to Rethink Energy’s new report, it turns out that recessionary pricing has indeed taken its toll on large global wind projects.

The Wind Industry Blown Off Course By Recession – Promises a Full Recovery report shows the third quarter of 2022 had a dramatic re-appraisal of some wind projects and a need to renegotiate terms for major deals that have already passed final investment decision and which have been suddenly staring losses in the face.

The U.S. Inflation Reduction Act (IRA) has also stopped projects stone dead, as project teams look to make the most out of IRA subsidies.

Any suggestions that recession and the IRA Act will do any more than knock out a couple of quarters of projects for the wind majors are vastly overblown. Already wind leaders are clear minded on what needs to be done and are attacking these issues with expectations of a quick turnaround, the report shows. Rethink Energy picked up the mood of the industry at conferences this month and concluded that they all just need time to react.

Vestas, Siemens Gamesa and GE may have recorded losses and some layoffs as there has been a slow-down in a both order flow and completed projects, which has had a knock on effect on their respective share prices.

“This month’s news that one of the largest ever wind contracts ever signed has been re-negotiated because it was in danger of making a loss, is just a typical part of that re-adjustment to recession economics,” says Bogdan Avramuta, Rethink Energy’s analyst and lead author of the report. “Steel manufacturing costs have also been playing a part in all this. It means decreasing margin on turbine sales translates into months-old power purchasing agreements (PPA) leaving energy distributors on the fringes of profit making.”

Rethink Energy had already forecast a stall in completed wind projects for 2022, but that was primarily on the back of delays to U.S. offshore projects, a slowing of onshore approvals both in the U.S. and Europe and despite a continuing Chinese surge in both onshore and offshore wind.

In September, Rethink Energy reported that China’s Q2 numbers showed rampant offshore wind installations with additional capacity for the half year at 6.8 GW accounting for 78% of all global new additions. Elsewhere in Asia in Vietnam and South Korea there was also further growth.

Rethink predicts that within a little more than a year all three major western wind turbine makers will be back in the black with health order books and smoother deal flow as the price of steel falls back to more typical levels and global transport pricing also falls back to a semblance of normality.