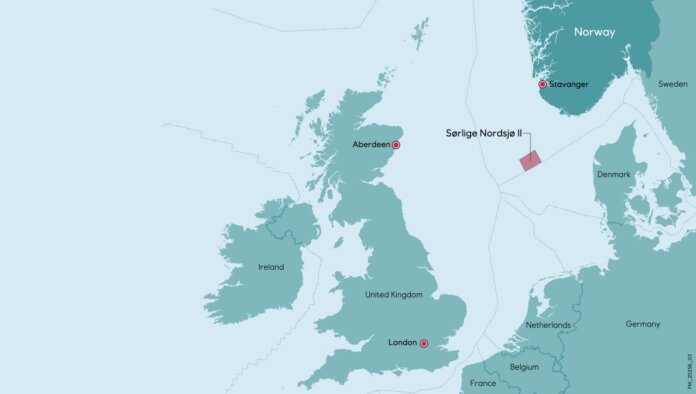 Equinor, RWE Renewables and Hydro REIN have signed a collaboration agreement for offshore wind in Norway. The partners will jointly prepare and submit an application to the Norwegian authorities to develop a large-scale bottom-fixed offshore wind farm in the Sørlige Nordsjø II area in the Norwegian North Sea.

The Norwegian Ministry of Petroleum and Energy has opened two areas for offshore renewables – Utsira Nord and Sørlige Nordsjø II – and is currently working on the licensing process for offshore wind power projects in Norway. The area borders the Danish sector in the North Sea and is ideally located to supply electricity to Europe.

The partnership represents a combination of experience and expertise from offshore wind development, energy market insight and large-scale industrial project execution. Together, the three companies say they have the complementary capabilities – as well as experience – needed to develop a large-scale offshore wind farm at Sørlige Nordsjø II.

“The North Sea has among the world’s best wind resources,” says Pål Eitrheim, executive vice president of new energy solutions at Equinor. “A large-scale offshore wind farm at Sørlige Nordsjø II could play a key role in expanding the North Sea as an offshore energy hub and create new industrial opportunities for Norway as an energy nation. Between Equinor, RWE and Hydro, we have the industrial capabilities – from the turbine to the consumer – to create value and supply renewable power to Europe.”

The Sørlige Nordsjø II area has water with depths between 53 and 70 meters. The area has the potential to deliver a significant amount of renewable energy to countries aiming to transform their energy mix, following the EU’s and the U.K.’s ambitions for 300 GW and 100 GW, respectively, of offshore wind capacity by 2050 to reach their net-zero ambitions.