Dr. Jürgen Zeschky has been named the new CEO at ENERCON. The announcement was made by the Aloys Wobben Foundation, ENERCON’s sole shareholder. On January 1, 2022, Zeschky will take over the official duties of Momme Janssen, who is leaving the company at the end of the year at his own request.

“With Dr. Jürgen Zeschky, we were able to win over an accomplished industry expert with proven technical expertise and many years of international management experience,” says Heiko Janssen, CEO of the Aloys Wobben Foundation. “He is the right candidate for the job at ENERCON. He will continue the realignment of the company with unchanged objectives and priorities and, together with the ENERCON team, lead it to success.”

Zeschky has worked with companies such as Mannesmann Demag, Demag Pneumatic Technology and Siemens Demag Delaval Turbomachinery, where he held managerial positions before moving to Voith Turbo and becoming managing director there in 2005. In 2012, Zeschky took over the position of CEO at wind turbine manufacturer Nordex SE and led the company through its restructuring. At his own request, Zeschky left Nordex in 2015. In 2016, he became CEO of the mechanical engineering group Hoerbiger Holding AG, where he worked until recently.

“I’m looking forward to my new role at ENERCON,” states Zeschky. “ENERCON is one of the onshore wind pioneers and continues to be one of the pioneering players in the energy transition. I would like to thank the Aloys Wobben Foundation for the trust they have placed in me, and I will be happy to continue the company’s chosen course. ENERCON has the best prerequisites to become a successful turbine manufacturer again.”

Momme Janssen will continue to run the official business until December 31 and will be available to ENERCON in an advisory capacity beyond this date. 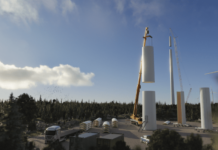