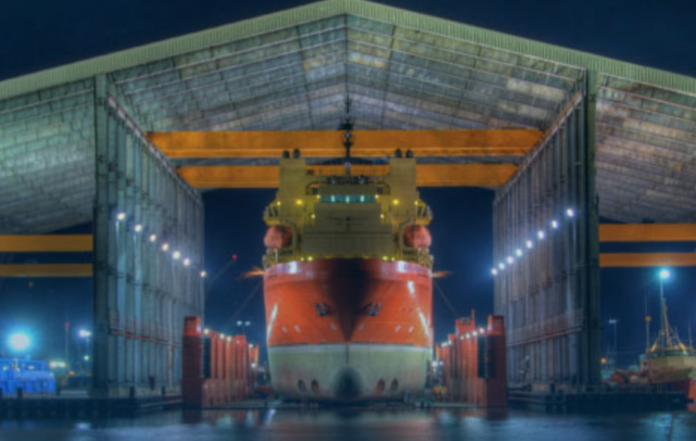 The SOV will be engineered, constructed and operated by ECO as part of the operation and maintenance of the Revolution Wind, South Fork Wind and Sunrise Wind offshore wind farms in the northeast U.S., which are dependent on obtaining the necessary federal permits from the Bureau of Ocean Energy Management (BOEM).

The SOV will be utilized during the operation and maintenance (O&M) phases of the wind farm projects, serving to accommodate and transfer technicians, tools and parts safely to and from the individual wind turbine generators. This vessel is a special-purpose design with a focus on passenger comfort and safety, enhanced maneuverability and ship motions, extended offshore endurance and reduced emissions.

The vessel will be built at a combination of Edison Chouest’s shipyards in Florida, Mississippi and Louisiana, creating over 300 new construction jobs. The construction of this vessel will also have a broader economic impact on other U.S. states hosting suppliers of major components, with some notable beneficiaries being North Carolina and Illinois for steel and main engines, respectively.

While the offshore wind industry is relatively new to the U.S., states in the Gulf of Mexico region, who have a long history in offshore-related industries, stand to immediately gain from the high transferability of existing jobs over to offshore wind. In addition to jobs created in Louisiana, the vessel will operate from New York once in operation.

“The offshore wind energy industry is generally well developed and understood, particularly in Europe where an enormous industry has developed over decades, but this industry is in an initial stage in the U.S.,” says Gary Chouest, president of ECO. “There is an unprecedented opportunity, with 12 offshore wind projects planned, an additional 10 offshore wind leases signed and another six wind leases awaiting award. In aggregate, there is a pipeline of well over 25,000 MW of power to be produced by over 1,700 wind turbines, across 13 states and in various stages of development that will require an incredible array of vessels, resources, knowledge and capital commitment to install, operate and repair.”

The vessel will be over 260 feet long and capable of housing 60 passengers. The SOV will include a below deck warehouse to palletize storage for wind farm tools, components and supplies with step-less access to an elevator.  A daughter craft will also be installed for infield turbine repair operations. In keeping with the environmental goals of the offshore wind industry, this vessel will operate on diesel-electric power that meets EPA Tier 4 emission standards.