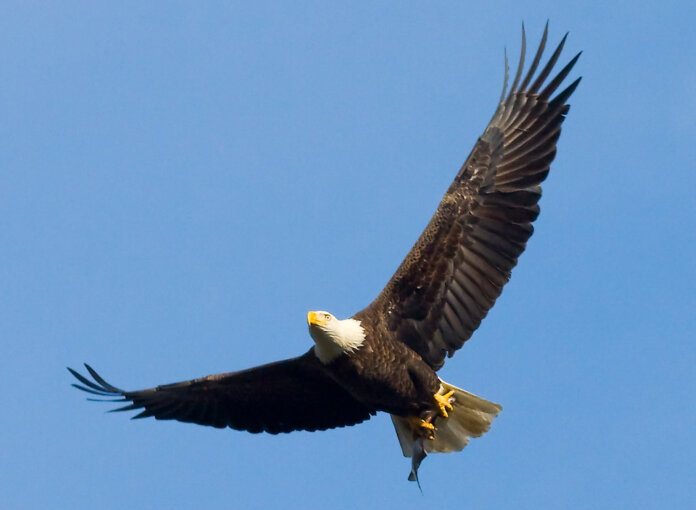 On September 30, the U.S. Fish and Wildlife Service published a proposed rule that would create a standardized permitting program for the incidental take of bald and golden eagles by qualifying activities such as wind energy projects and power lines.

The proposed rule would amend the service’s Bald and Golden Eagle Protection Act (BGEPA) permitting regulations to offer general take permits as an alternative to the project-specific eagle take permits that are available under current regulations. General permits would be valid for five years subject to renewal and would be issued automatically without discretionary service review to applicants who self-identify eligibility and register with the agency.

The program would offer wind energy projects the benefits of faster processing times for eagle take permits, standardized permit conditions, and the opportunity to avoid environmental review under the National Environmental Policy Act (NEPA) if the project has no other federal nexus. The proposed rule also provides that compensatory mitigation obligations for wind energy general permit holders will be calculated at a fixed ratio based on project size and area and may be satisfied via service-approved in-lieu fees or conservation banks, which is projected to reduce overall mitigation costs.

The service has asked for comments on the rule by November 29.

BGEPA prohibits the take, possession, and transportation of bald eagles and golden eagles except as provided in federal regulations. In 2009, following the bald eagle’s delisting from the Endangered Species Act, the service promulgated regulations establishing a framework for individual incidental take permits for eagles and nests.

In 2016, the service updated the regulations to extend the life of take permits from five to 30 years and impose preconstruction monitoring requirements for wind energy projects, among other changes. The 2016 rule was challenged by the Energy and Wildlife Action Coalition, and the parties entered into a settlement agreement in 2019. The proposed rule is, in part, an outcome of that settlement.

The service itself admits that participation in its eagle take program remains below expectations and points to administrative processing times as a likely culprit. The proposed rule seeks to encourage participation by cutting red tape for common types of projects and reducing the administrative burden on the service, all the while maintaining strict monitoring, reporting, and mitigation obligations to uphold BGEPA’s preservation standard of maintaining stable or increasing breeding populations.

However, unlike specific permits, general permits would not involve individual discretionary review by the service. Instead, applicants would self-report eligibility and obtain coverage automatically after paying a $500 application fee and an administration fee of $2,625 per turbine. That means no long administrative wait times, negotiating conditions with staff, or NEPA review for general permits alone.

In terms of oversight, the service intends to conduct annual audits for a small percentage of all general permits to ensure applicants are appropriately interpreting and applying eligibility criteria. General permits would have a maximum term of five years subject to renewal for up to 30 years total.

Also unlike specific permits, general permits for wind projects would not authorize take of a fixed number of eagles on the face of the permit. However, discovery of three eagles of any one species would trigger adaptive management, and if a project discovers a fourth eagle during the permit’s five-year term, then the developer would not be able to obtain future general permits for incidental take for that project and would have to apply for a specific permit for eagle take to obtain further coverage.

The proposed rule also makes significant changes to the project-specific permit program that the industry has sought for a long time, such as by removing the service’s five-year review and potential update requirement and instead committing to holding the amount of take authorized under a specific permit constant over its 30-year lifespan unless the permittee requests an amendment, or unless the service determines that an amendment is necessary.

And, as discussed further below, the service appears to be broadening avenues for satisfying compensatory mitigation obligations under specific permits with in-lieu fees and conservation banks.

The proposed rule is notable for its treatment of mitigation. For specific permits, mitigation would continue to be based on the number of eagles authorized for take. For general permits without fixed take limits, mitigation would be calculated using regional density averages. Wind projects within the Pacific eagle management unit (EMU) would be required to compensate for 11.48 eagles per cubic kilometer of the project’s hazardous volume; projects within the Central EMU would require 7.88 eagles per cubic kilometer; and projects in the Atlantic/Mississippi EMU would require 6.56 eagles per cubic kilometer. (The hazardous volume of a project is calculated as the number of turbines multiplied by 0.200π(d/2)^2, where d is the diameter of the blades in kilometers.)

The service anticipates that these fixed ratios will significantly reduce compensatory mitigation costs for permittees relative to the existing regulations; for example, the service projects that mitigating for a 36-turbine project will cost approximately $42,000 over a general permit’s five-year term as opposed to $578,000 under the current framework (assuming a market rate of $82,500 per eagle credit).

Moreover, the proposed rule provides that compensatory mitigation for general and specific permits may be satisfied via a service-approved in-lieu fee or conservation bank. This is technically the case already, but at present, the only mitigation activity that the service has approved under in-lieu fee programs is retrofitting utility poles. Hopefully, the proposed rule’s identification of fee and credit programs for compensatory mitigation means more service-approved options for developers in the near future.

Other features of the proposed rule include eliminating the 2016 rule’s requirement for independent third-party monitoring for general and specific permits, updating certain regulatory definitions (such as narrowing the definition of “eagle nest” to exclude nest structures on failed nesting substrate), and updating the boundaries of EMUs.

A general permit program for eagle take incidental to wind energy projects is a novel approach to managing species mortality with a number of attractive benefits for developers. For one, the automatic issuance of general permits upon self-certification allows project proponents to avoid lengthy and costly negotiations with the service if the project meets the eligibility criteria and observes the program’s standardized conditions. Avoiding discretionary review by the service also means that wind energy developers of private lands can avoid undergoing NEPA review for projects that have no other federal nexus.

The program appears aimed to resemble the U.S. Army Corps of Engineers’ nationwide permit program for impacts to waters of the United States, which has proven to be far more efficient than issuing thousands of individual permits each year. And, if the service’s compensatory mitigation cost projections are accurate, general permit holders are poised for significant savings relative to the current regulations.

Stakeholders should take the opportunity to closely review the proposed rule and provide feedback to the agency while the rulemaking is live. The service will hold two information sessions open to the general public on October 20 at 9am PST and November 3 at 11am PST. Registration instructions and updated session information can be accessed on the service web page.

Reed McCalib is an attorney at Bell Kearns Ltd., a law firm specializing in the permitting of large-scale energy projects across the western U.S.