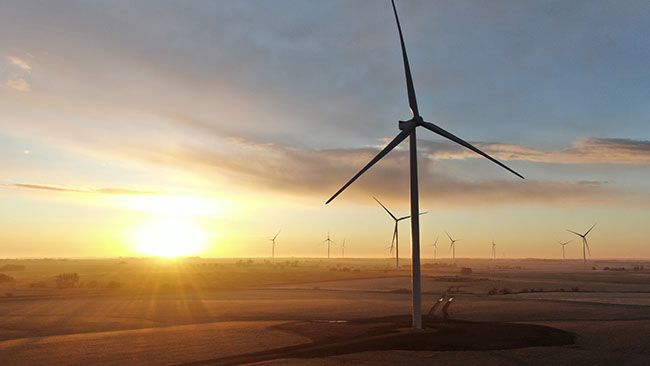 Duke Energy Renewables, a commercial business unit of Duke Energy, says the largest wind power project in its fleet – the 350 MW Frontier Windpower II project in Kay County, Okla. – is up and running.

The project is an expansion of the 200 MW Frontier Windpower project, operational since 2016. Together, Frontier I and II are generating a total of 550 MW of wind energy. AT&T and Ball Corp. have signed 15-year virtual power purchase agreements (VPPAs) for 160 MW and 161 MW, respectively. These VPPAs will settle on an as-generated basis tied to Frontier II’s real-time energy output.

“We’re pleased to be working with AT&T and Ball Corp. on the Frontier II project, which is located in an area that has some of the best wind resources in the country,” says Chris Fallon, president of Duke Energy Renewables. “This project further demonstrates how we can address the community’s need for clean energy resources while providing sustainability solutions for our customers.”

During peak construction, the wind project created approximately 250 jobs. Along with indirect economic benefits that accompany wind project development, such as increased local spending in the service and construction industries, Frontier II will also have a positive economic impact on the local community by providing significant local tax revenues during assessment years of commercial operation to the county and local school districts, as well as meaningful payments to participating landowners.