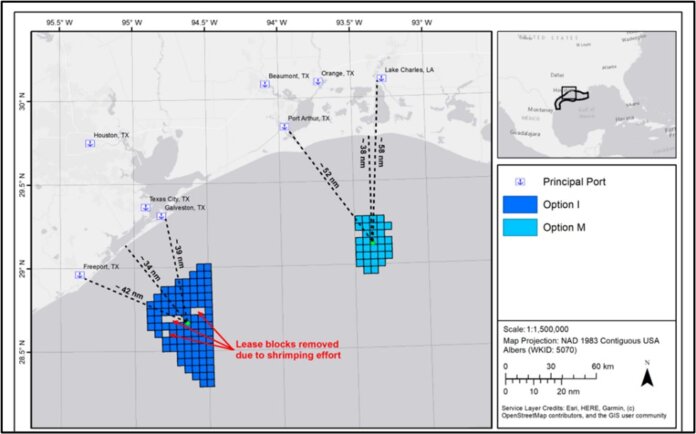 In response to President Briden’s call to advance offshore wind development and accelerate the transition to a clean energy economy, the Department of the Interior has stated the next steps to bring offshore wind energy to the Gulf of Mexico.

The Bureau of Ocean Energy Management (BOEM) works under its renewable energy competitive leasing process to identify the offshore locations that appear most suitable for development, taking into consideration potential impacts to resources and ocean users. BOEM is seeking public input on the identification of two potential wind energy areas (WEAs) in the Gulf of Mexico (GOM) Outer Continental Shelf (OCS).

“President Biden has called on us to address the climate crisis and Interior is taking that challenge to heart. The promise of renewable energy is undeniable, as is the momentum for a clean energy transition,” says Secretary of the Interior Deb Haaland. “This announcement in the Gulf of Mexico is one of many commitments we are making to spur innovation, create good-paying jobs and collaborate with states, Tribes and communities to ensure that we are doing everything we can to care for our Earth.”

Over the past year, the Biden-Harris administration has launched the American offshore wind industry by approving and celebrating the groundbreaking of the nation’s first two commercial-scale, offshore wind projects in federal waters. By 2025, the Interior Department plans to potentially hold up to five additional offshore lease sales and complete the review of at least 16 plans to construct and operate commercial, offshore wind energy facilities, which would represent more than 22 GW of clean energy for the nation.

“BOEM used the most current scientific data to analyze 30 million acres in the Call Area to find the best spaces for wind energy development. We are invested in working in partnership with states and communities to find areas that avoid or minimize conflicts with other ocean uses and marine life in the Gulf of Mexico,” states Amanda Lefton, BOEM’s director. “We are committed to a transparent, inclusive and data-driven process that ensures all ocean users flourish in the Gulf.”

The two draft WEAs represent a subset of the original 30-million-acre Gulf of Mexico Call Area that the Department of the Interior announced for public comment in October 2021. The draft WEAs were reduced to avoid potential impacts on other ocean uses and resources, such as commercial and recreational fishing, maritime navigation, military activities, marine protected species, avian species, and existing infrastructure.

Public comments on the draft WEAs will be accepted for 30 days beginning July 20, 2022.

During the comment period, BOEM will hold two virtual public meetings where the public can learn more about the environmental review process. There will also be an opportunity for participants to ask questions and provide comments on the draft EA.