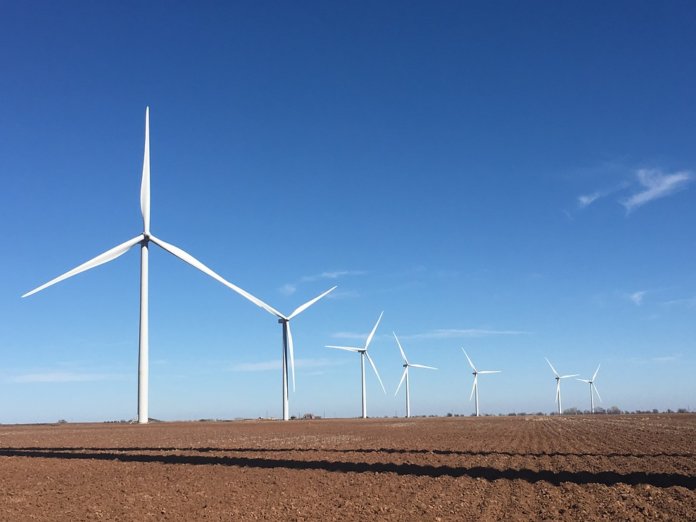 Wind energy pricing remains attractive, according to a report released by the U.S. Department of Energy (DOE) and prepared by Lawrence Berkeley National Laboratory. With prices averaging below 2 cents per kWh for newly built projects, wind is competitive with other generation sources, the report says.

Key findings from the DOE’s “Wind Technologies Market Report” include as follows:

Low wind turbine pricing continues to push down installed project costs. Wind turbine equipment prices have fallen to $700-$900 per kW, and these declines are pushing down project-level costs. The average installed cost of wind projects in 2018 was $1,470 per kW, down 40% since the peak in 2009 and 2010.

Wind energy prices are at historic lows. Lower installed project costs, along with improvements in capacity factors, are enabling aggressive wind power pricing. After topping out at 7 cents per kWh in 2009, the average levelized long-term price from wind power sales agreements has dropped to below 2 cents per kWh. Recently signed wind energy contracts compare favorably to projections of the fuel costs of gas-fired generation. Solar prices have also declined precipitously, pressuring wind’s competitiveness in some regions. The levelized cost of wind also hit an all-time low, averaging $36 per MWh for plants built in 2018.

The grid-system value of wind has declined over the last decade but rebounded over the last two years. The value of wind in wholesale power markets is impacted by the location of wind plants, their hourly output profiles, and how those characteristics correlate with real-time electricity prices and capacity markets. The market value of wind in 2018 was the lowest in the Southwest Power Pool and Texas (average of $17 per MWh and $18 per MWh, respectively), whereas the highest-value market was New England (at $41 per MWh). Wind energy prices are generally competitive with these value estimates, spurring demand for wind from both traditional electric utilities and non-utility purchasers, such as corporations, universities and municipalities.

The domestic supply chain for wind equipment is diverse. For wind projects recently installed in the U.S., domestically manufactured content is highest for nacelle assembly (more than 90%), towers (75% to 90%), and blades and hubs (50% to 70%). It is much lower (less than 20%) for most components internal to the nacelle. Further, wind sector employment reached a new high of 114,000 full-time workers at the end of 2018.

Berkeley Lab’s contributions to this report were funded by the DOE’s Office of Energy Efficiency and Renewable Energy. The full 2018 Wind Technologies Market Report can be downloaded here.

Wonder what real total cost is including links to the plug. From article: “Wind energy prices ­– ­particularly in the central United States, and supported by federal tax incentives – are at all-time lows, with utilities and corporate buyers selecting wind as a low-cost option,” states Ryan Wiser, Berkeley Lab senior scientist. Big tax credits runs out next year so that is why there is a big push for large farms. Need tax credits for installing new modular nuclear reactors – extra credit using closed old plants using some of the systems and utility connections – no need for batteries… Read more »

There is very little serious intent to install new nuclear capacity in the United States since the Three Mile Island meltdown 40 years ago. Humanity has done the right thing by stepping back from a dangerous ledge instead of relentless pushing technological solutions to technological problems. Last time I checked, of the nine NRC permits issued for new nuclear capacity in the United States, eight of the permit seekers had withdrawn their applications due to local opposition, the enormous drop in the costs of renewable alternatives, site-specific limitations, or problems coming up with the billions of dollars required to build… Read more »

Batteries do not use rare earths. Batteries use Lithium and Cobalt. And Tesla wisely uses induction motors instead of permanent-magnet motors.

The report is saying that wind power prices are lower – this only means that the market for electricity is lower. The price is based on the market. The key question is what are the wind power costs? Since we subsidize the windmills for 10 years, installers can keep building the windmills whether they are economic or not since the govt pays a high subsidy.
Claims that Wind is competitive with other sources of power depend upon the subsidy.

EIA.gov data (Levelized Cost Methodology) shows that even without subsidies, both wind and solar are cheaper than all but one type of natural gas combined cycle turbine. When it comes to coal or nuclear, no competition, nuclear is many multiples more expensive than both wind and solar.