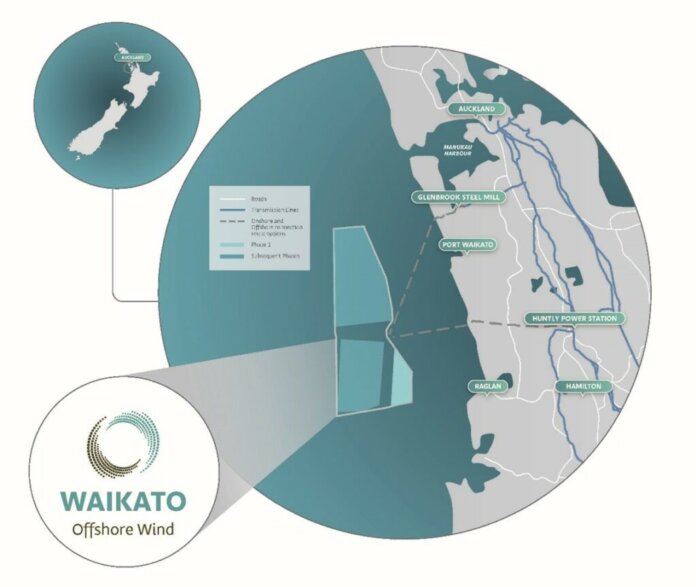 The project, currently named Waikato Offshore Wind project, is intended to be developed in phases to generate capacity of up to 1.4 GW of power using both fixed and floating foundation technology and capable of powering around 700,000 homes.

Phase 1 of the project is for a ~250 MW development using fixed bottom technology 22 kilometers off the West Waikato coast. Options for Phase 2 utilize floating foundations and include the potential for an 800-1,150 MW development positioned to the west or north of Phase 1.

The consortium has completed its initial site selection and the project is now in the feasibility stage with construction expected to commence before 2030. The lifecycle of offshore wind farms is around 35-40 years at which point they would be decommissioned or re-furbished – providing decades of enduring employment opportunities and a secure supply of renewable generation to the Waikato and Auckland regions.

“We believe that offshore wind energy can help achieve 600% renewable energy in Aotearoa creating security of supply for the country, meeting increased demands for electrification and decarbonization.” says Carlos Martin, CEO of BlueFloat Energy who visited New Zealand in July to meet with iwi and hapū groups, government and industry.

“Overbuilding of renewables capacity and increasing energy storage was recently described by Energy Minister Megan Woods as ‘mission critical’ and we are keen to support the government in achieving their energy ambitions. We welcome the announcement of a regulatory framework for offshore wind by mid-2024 and are pleased this is a key focus for the government,” adds Martin.

The partnership has been engaging with iwi and key stakeholders to determine the feasibility of offshore wind projects in New Zealand. The partnership is committed to honoring Te Tiriti o Waitangi and are engaging in ongoing discussions with iwi and hapū in South Auckland and Waikato about potential partnership models, including co-design.

“We are committed to the development of the offshore wind energy sector in Aotearoa in a way that is inclusive and future facing and delivers enduring benefits to communities, regions and Aotearoa as a whole,” states Energy Estate co-founder Simon Currie. “We have a real opportunity to build the sector in a way where the offshore wind industry collaborates and doesn’t just compete. Our partnership wants to build an industry – not just projects.”

Offshore wind in the South Auckland-Waikato region will benefit from close proximity to the Huntly power station and the Glenbrook substation in South Auckland, next door to NZ Steel’s operations, offering a direct route to the grid and the potential to provide new supplies of clean energy to consumers and industry in the Waikato and greater Auckland area.

“An offshore wind energy industry will provide thousands of jobs for New Zealanders and require an entire local supply chain to support it throughout its lifetime,” says Nick Jackson, Elemental’s director. “This is particularly true with floating wind developments which require significantly higher local content in manufacturing and services in addition to the expected operations and maintenance roles.”

“Our partnership is focused on providing positive social procurement outcomes that create benefits to the communities where we work and we will continue to work closely with local iwi, the Waikato community, Councils, Te Waka and Tātaki Auckland Unlimited to progress this opportunity,” adds Jackson.

“The energy sector is a key growth industry in the Waikato,” comments Fiona Carrick, chief executive of Te Waka, Waikato’s Economic Development Agency. “The region is uniquely placed to become a national leader in renewable energy generation, and we are very pleased to welcome this project as another exciting development in the sector. As New Zealand, and the world, transition from fossil fuels, the Waikato region’s potential in geothermal, hydro-electric and wind power shapes up as a significant area of opportunity.”

“With a new urban development equivalent to the size of Napier planned in southern Auckland for the next 30 years, we are excited for the offshore wind project and the opportunities this presents for sustainable business, investment and skilled employment opportunities in the area,” mentions Tātaki Auckland Unlimited Director of Investment and Industry Pam Ford.

“We look forward to working with the consortium on making this project a reality, delivering enduring benefits to the community and a greener Aotearoa.” Subject to further successful engagement with iwi and stakeholders and obtaining all necessary government and regulatory approvals the consortium hopes to see the first turbines in the water before the end of the decade.