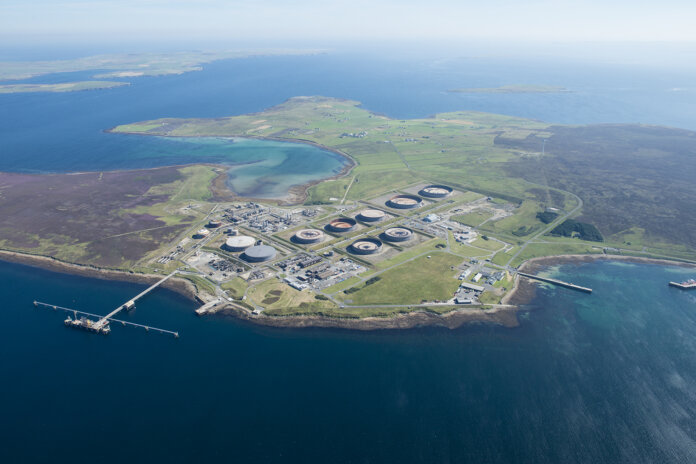 Offshore Wind Power Ltd. (OWPL), the consortium formed by Macquarie’s Green Investment Group, TotalEnergies and Scottish developer Renewable Infrastructure Development Group (RIDG), is studying the use of offshore wind to power the production of green hydrogen on an industrial scale on the island of Flotta in Orkney, Scotland.

The OWPL consortium has submitted a proposal to the Crown Estate Scotland’s offshore wind leasing round (ScotWind) to develop the N1 plan option area west of Orkney. If successful, its proposal – called the West of Orkney Windfarm – could deliver renewable power to a green hydrogen production facility at the Flotta Terminal.

Plans to power the proposed Flotta Hydrogen Hub are being developed by OWPL in partnership with Flotta Terminal’s owner Repsol Sinopec, and Uniper, a leading international energy company and pioneer in the field of hydrogen. The proposal is also supported locally by EMEC Hydrogen who have spearheaded Orkney’s leading position in green hydrogen production.

“We believe that green hydrogen could provide a critical alternative route to market for some of Scotland’s largest offshore wind projects and play a significant role in creating wider economic benefits as the North Sea goes through its energy transition,” says Edward Northam, head of Green Investment Group Europe. “We look forward to working with the Flotta partners to continue to develop this proposal.”

“The production of green hydrogen is a hugely exciting opportunity for both offshore wind and the Scottish supply chain,” states Mike Hay, RIDG’s commercial director. “Projects with substantial capacity factors, such as the West of Orkney Windfarm, could deliver highly competitive power to facilities like the Flotta Hydrogen Hub which could, in turn, supply demand for hydrogen both nationally and internationally. We’ve therefore committed to working exclusively with our partners to investigate this opportunity thoroughly and have already completed cable routing assessments and nearshore geophysical surveys to better understand the practical aspects of project delivery.”