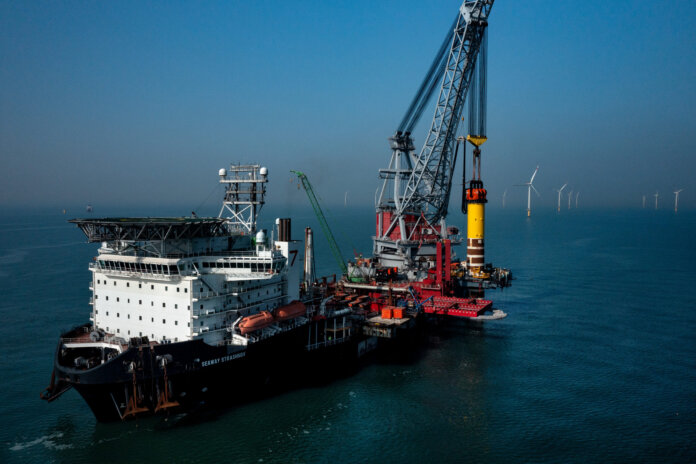 CAPE Holland’s Vibro Lifting Tool (VLT), the CAPE VLT-640 Triple, has completed its work at Kaskasi II OWF Beilen, an offshore wind farm in the German North Sea. The initial stages started in 2016, and the consequential contract award from Seaway 7 in 2020.

Seaway 7 used the CAPE VLT to drive a new type of monopiles with a self-expanding pile shoe (SEPS). Flanged monopiles have been upended, lifted and vibrated with CAPE Holland’s patent-pending flange clamping system. Although the monopiles where not vibrated to end depth, new insights and data have been collected via a newly developed monitoring, logging and survey system.

“We regret that the CAPE VLT was only used on Kaskasi on a reduced number of seven monopiles,” comments Frits Laugeman, project director at RWE Renewables. “As a consequence, the tool may not have been able to show its full potential in installing monopiles.”

“We like to thank both RWE and Seaway 7 for their trust in CAPE Holland and the co-operation during the project even though the installation scope of the project was significantly reduced by Seaway 7 compared to the original plan,” says Laurens de Neef, CEO at CAPE Holland. “We look forward to our next European wind project later this year where the CAPE VLT will be upending and partly installing flanged monopiles, followed by our first offshore wind project in Japan with the CAPE VLT.”