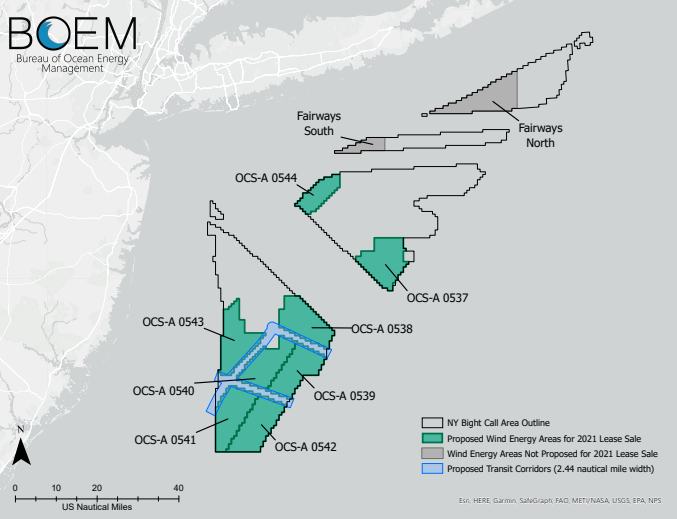 The Bureau of Ocean Energy Management (BOEM) has completed its environmental review of potential impacts from offshore wind energy leasing activities in the New York Bight, a portion of the Atlantic Ocean located offshore New York and New Jersey.

The final Environmental Assessment (EA) assesses potential impacts from the issuance of leases within nearly 800,000 acres of wind energy areas in the New York Bight. Based on the analysis in the EA, BOEM has issued a finding of no significant impact (FONSI).

“The completion of this environmental assessment is an important step forward in advancing the Biden-Harris administration’s goal of increasing renewable energy development on federal lands and waters,” states Amanda Lefton, BOEM’s director. “BOEM is focused on ensuring that any development in the New York Bight is done responsibly and in a way that avoids or minimizes impacts to the ocean and other ocean users in the region.”

Should a lease sale advance and before approving the construction of any offshore wind energy facility in the New York Bight wind energy areas, BOEM will develop an environmental impact statement to analyze the specific environmental consequences, in consultation with Tribes and appropriate federal, state and local agencies, and with participation by stakeholders and the public.

The EA, FONSI and detailed information about the proposed leasing in the New York Bight are available here.

BOEM initially announced its intent to prepare an EA for the New York Bight on March 29, 2021. BOEM sought public input on the issues and alternatives to be considered in the EA and received approximately 3,000 comments (under Docket No. BOEM-2021-0021).

BOEM published the draft EA on August 10, 2021. In conjunction with its release, BOEM held two public virtual meetings with stakeholders to obtain their input. The release of the draft EA initiated a 30-day public comment period on the assessment itself, which was extended for an additional 14 days. BOEM received approximately 50 comments on the draft (under Docket No. BOEM-2021-0054).