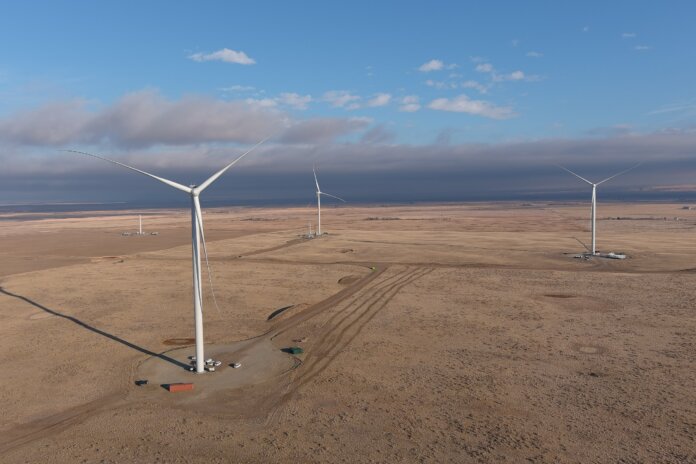 BHE Canada’s Rattlesnake Ridge Wind Farm is now commercially operational and supplying energy to Alberta’s grid. The 26-turbine wind farm is located southwest of Medicine Hat. It is the company’s first wind farm in Canada and will provide Alberta consumers with 130 MW of energy.

The wind farm is privately financed by BHE Canada through a combination of equity and debt, requiring no government subsidies or tax incentives to support its operation.

“This is an exciting milestone for us, and for Alberta’s energy industry, with new grid-scale wind generation constructed and operating without government subsidies,” states Ed Rihn, president and CEO of BHE Canada. “We’re proud to facilitate a more sustainable energy future for Albertans and look forward to more investment opportunities in Alberta and across Canada.”

“The Rattlesnake Wind project is our 20th major renewable construction project in Canada, and we are pleased to see this project achieve commercial operation,” comments Liam Duffy, RES’s general manager of construction in Canada. “The addition of this facility showcases our commitment to the construction of wind energy and brings RES closer to fulfilling our vision of a future where everyone has access to affordable zero carbon energy.”

To celebrate the milestone, a ribbon-cutting event was held at the Rattlesnake project site just outside of Medicine Hat. Representatives from BHE Canada and RES were joined by Mr. Grant Hunter, MLA Taber-Warner, and Craig Widmer, Reeve of County of Forty Mile, to help mark the occasion.

“Southern Alberta is home to some of the best supply of wind energy in the world. It is with pleasure that I congratulate BHE Canada on developing the Rattlesnake Ridge Wind Power Project,” says Grant Hunter, Taber-Warner’s MLA. “The County of Forty Mile will greatly benefit from this renewable wind project, and so will 78,000 homes in Alberta. Rattlesnake stands on its own without any government funding, as Albertans would expect.”

“With southern Alberta being the sunniest and relatively breezy at times, our area provides an exceptional opportunity for renewable energy companies to capture these resources and provide the province with clean renewable energy,” adds Craig Widmer, reeve of County of Forty Mile.

I like that second paragraph….no government subsidy’s or tax incentives. It’s nice read that a handout wasn’t given, All indications are that renewable energy projects are not dependent on handouts anymore.