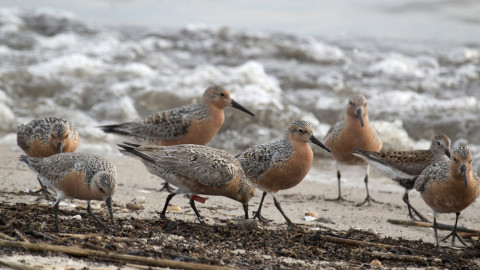 This expanded second phase includes a doubling of the red knots tagged, now 60 birds, and a new partner, the New Jersey Audubon, one of the oldest environmental organizations in the state.

Red knots, a state endangered and federally threatened shorebird, migrate each year from as far south as Tierra del Fuego, Argentina, to the Canadian Arctic and then back again. On their trip north, they stop in the Delaware Bay to feast on horseshoe crab eggs before going to the Canadian Arctic to breed, just as they stop in New Jersey on their way south for the winter.

In the second phase of the project, WRP will attach satellite tags to red knots migrating south as they stop in New Jersey’s Brigantine Natural Area, Atlantic County, and Stone Harbor Point, Cape May County, and on birds in Lagoa do Peixe, Brazil, as they migrate north. The tags will allow a satellite to collect up to 60 points of information on each bird’s precise location, flight path and varying altitude. Collected data will be correlated with meteorological conditions (i.e., wind speed, wind direction, visibility and precipitation). Data will be collected near real-time and more comprehensively analyzed by researchers and Atlantic Shores.

“Atlantic Shores is thrilled to be continuing this essential migration study, now with the invaluable partnership of the New Jersey Audubon,” says Jennifer Daniels, development director at Atlantic Shores. “The second phase of the red knot study enables us to responsibly develop our Lease Area while helping to deliver cutting-edge data to scientists in a range of fields.”

Atlantic Shores will use the data to address risks to these birds and the surrounding environment as they develop an offshore wind project within its Lease Area, located 10-20 miles off the New Jersey coast. Atlantic Shores has committed to share its findings publicly so as to inform other researchers and offshore work.