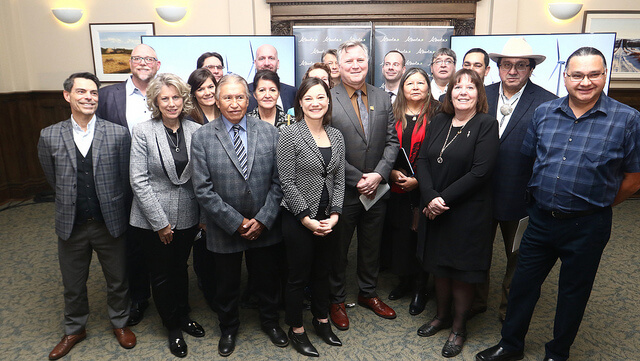 The investments, totaling C$1.2 billion, come from Albertan companies, as well as from investors outside the province – e.g., Ontario and France. Notably, three of the wind projects are private-sector partnerships with First Nations.

Each project is expected to begin construction in 2020 and be fully operational by mid-2021:

“This is a historic announcement, showing our government’s true commitment to partnering with Indigenous communities to create new jobs and economic opportunities,” comments Richard Feehan, minister of indigenous relations. “First Nations have played a key role in Alberta’s renewable electricity sector, and this is only a first step in a meaningful, long-term relationship of developing green power with Indigenous communities.”

The weighted average price of C$39/MWh is just shy of the Canadian record-low price achieved by Alberta one year ago, the government notes. Through the opening round of REP last December, the AESO announced deals to secure power from three new wind projects representing approximately 600 MW of capacity at an average price of C$37/MWh.

“Our made-in-Alberta plan is working to once again turn Alberta’s renewable energy resources into new jobs and investment in communities across the province, while producing the lowest-cost power available for Albertans,” states Shannon Phillips, minister of environment and parks. “These major private investments in southern Alberta wind projects also bring important professional service opportunities to downtown Calgary and new economic opportunities for Indigenous communities, making it a win-win for all Albertans.”

The Alberta government expects the new developments to create about 1,000 jobs and bring an estimated C$175 million in rural benefits over the life of the projects, including landowner payments and municipal revenues.

“The competitive nature of these procurement processes made it possible to secure low-cost power for the Alberta grid,” notes Evan Wilson, regional director for the prairies at the Canadian Wind Energy Association (CanWEA). “That in turn provides an incredible opportunity for significant and sustainable greenhouse-gas reductions in the electricity sector while also presenting Albertans, particularly Indigenous and rural communities, with new job and economic opportunities.”

CanWEA points out that the companies behind the newly announced projects have each signed a 20-year Indexed Renewable Energy Credit (IREC) agreement with the AESO, providing predictable revenues while protecting Albertans against increases in the price of power. Under the IREC, when the market price is lower than the contracted price, the generator will be paid the difference; when the market price is higher, generators will be required to pay back the difference to the government.