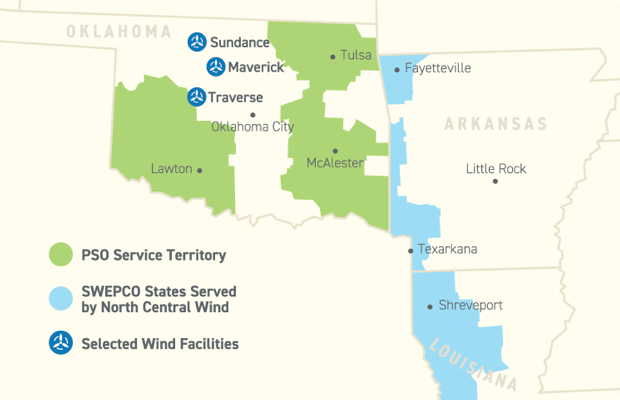 Located in Woods County, Sundance is one of three wind projects that comprise the North Central Energy Facilities, which will provide 1,485 MW of energy to customers of AEP’s Public Service Company of Oklahoma (PSO) and Southwestern Electric Power Co. subsidiaries.

Invenergy is developing the North Central Energy Facilities, and PSO and SWEPCO will assume ownership of each of the three wind projects following their commercial operation. The other facilities, Maverick (287 MW) and Traverse (999 MW), are expected to begin operating later this year and in early 2022, respectively.

“The completion of Sundance is a milestone for AEP and our customers as we continue to build a clean energy future,” says Nicholas K. Akins, chairman, president and CEO of AEP. “North Central will ensure we can provide clean, reliable energy to our customers in Arkansas, Louisiana and Oklahoma – while also saving them an estimated $3 billion in electricity costs over the next 30 years. We continue to transform AEP’s generation fleet with investments in new wind and solar and modernize the grid to support the integration of more renewable resources and new technologies.”

The combined North Central wind projects represent a $2 billion investment in the U.S. economy through jobs in manufacturing, construction, operations and maintenance – in addition to generating property tax revenue and lease payments for landowners.