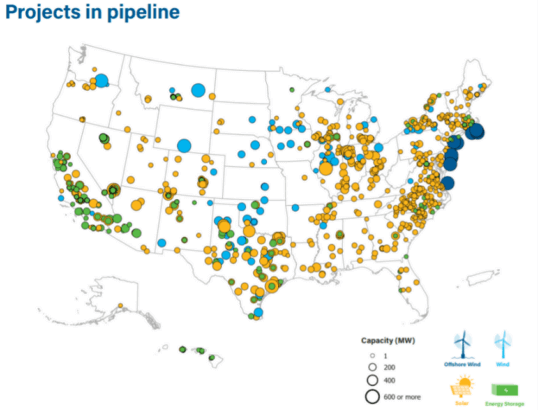 While the clean energy industry celebrated the August passage of the Inflation Reduction Act (IRA), the largest clean energy investment in U.S. history, policy challenges continued to limit clean power growth in the third quarter, according to a new report released by the American Clean Power Association (ACP).

From July to September 2022, 3.4 GW of new utility-scale clean power capacity were installed, bringing 2022 year-to-date installations to 14.2 GW, according to the Clean Power Quarterly Market Report. Installations were down 22% compared to the third quarter of 2021, and down 18% year-to-date.

Only battery storage, which commissioned 1.2 GW this quarter, increased installations compared to the third quarter of 2021. Storage is having its best year on record, with 2022 installations already nearly even with total 2021 volumes.

Project delays weighed heavily on installation volumes as developers struggled to procure solar panels, faced supply chain challenges, and confronted ever-growing interconnection queues to connect projects to the grid. In total, 14 GW of clean power capacity was delayed this quarter, adding to a growing backlog of delayed projects that totals 36 GW – 63% of which are solar projects.

“While the IRA is set to catalyze clean energy growth, the industry continues to deal with policy and regulatory challenges hindering development and deployment of clean power,” says JC Sandberg, interim CEO and chief advocacy officer.

“The solar market has faced repeated delays as companies struggle to obtain panels as a result of an opaque and slow-moving process at U.S. Customs and Border Protection. Policy uncertainty around tax incentives constrained wind development, underscoring the near-term need for clear guidance from the Treasury Department so the industry can deliver on the promise of the IRA. Storage was the one bright spot for the industry and had its second-best quarter on record,” Sandberg continues. “The aggressive deployment of storage continues to drive down consumer energy costs and enhance grid reliability.”

Amazon was the largest purchaser of the quarter after announcing another 2 GW of clean power procurement in the U.S.

“ACP anticipates that the IRA will give industry the tools it needs to more than triple annual installations of wind, solar, and battery storage by the end of the decade. We expect the IRA to deliver 550 GW of new capacity by 2030, representing $600 billion in capital investment and growing the clean power workforce to nearly a million strong by 2030. We continue to work with relevant government decision-makers to quickly resolve remaining tax guidance, supply chain, and trade challenges to realize the IRA’s full potential. This is essential to set the nation on a path to achieve its clean energy goals,” concludes Sandberg.

Nearly 14.2 GW of clean power capacity were delayed this quarter, of which more than half had already experienced delays. In total, ACP is tracking 36.2 GW of delayed projects, plus a further 3.5 GW that have been terminated or canceled.

Projects that failed to come online this quarter have an expected delay of half a year, while many have been pushed back several years. Less than half of the delayed capacity is expected online by the end of the year.

Solar dominates the clean energy project pipeline but also accounts for the majority of delayed capacity, at 63%. Land-based wind accounts for 23% of delays and battery storage the remaining 14%.

Solar panel detentions are preventing projects from reaching completion and threaten to disrupt the pace of future installations, while supply chain disruptions and grid interconnection delays have slowed the pace of wind installations.

The 350 MW Azure Sky Wind Project, owned and developed by Enel in Texas, was the largest wind project to achieve operations this quarter. The 123 MW/189 MWh storage portion of the project is expected online by the end of the year.

In total, there are now 216.4 GW of utility scale clean energy operating, powering approximately 59 million homes across the country. Sixty five percent of that capacity is land-based wind, 32% solar, 4% battery storage, and less than 1% offshore wind. Operational capacity has increased 7% since the start of the year.

Capacity entering the pipeline has been waning over the past few quarters, down 36% from Q2 and 40% from Q1.

Announcements of new contracts by clean power buyers also slowed this quarter. Buyers and developers announced 7.2 GW of new power purchase agreements (PPAs) this quarter, down 31% from the same period last year. Year to date, announcements are down just 3% compared to 2021.

Commercial and industrial (C&I) purchases account for 43% of announcements, and utilities an additional 25%.